5 Mr Gumball 3000 and Eve Enjoy Their Vacation While Driving a Ferrari 458
Car video reviews:
Up Next

With one of the world’s most eccentric rallies being around the corner, this year’s participants are gearing up their rides. Tuning shops around the world will be sharing pictures and videos with their creations, as an entire race of customization methods has started long before the moment the flag drops. The most recent of them all is Team Anime, who have wrapped their ride with the proper characters.

Now, before we go through this piece, we should tell you people that the anime culture should receive the proper respect and appreciation. It might not be that popular in the Western culture, but you probably heard by now it’s quite a big deal in a lot of other parts, and, of course, in Japan. If we were to look at this wrap with a critical view, exactly like an Anime enthusiast would do, we’d say it’s not that good.

In fact, believe it or not, but one of our team members actually is that type of a guy. Other than the fact he has been buying Anime magazines every since he was just a kid, he even draws some himself today. So the natural thing to do was to ask for his opinion.

First of all, the art doesn’t seem top notch, and the colors are quite dull. Then, there are the characters. My colleague says the driver should have chosen some popular ones for people to recognize them.

He could have used characters such as Dragonball Z, Evangelion or even Pikachu. After all, isn’t Gumball 3000 about showing off, outshining your fellow racers?

However, leaving the wrap itself behind for a second, we have to admit the car itself is quite impressive. We’re looking at a rare wide-body Ferrari 458 enhanced with proper custom features that include some work on the exhaust and engine, as well as an upgraded sound system.

We had the opinion of an Anime enthusiast, we discussed a little about the car itself, now it’s your turn to speak out and tell us what you think of it. 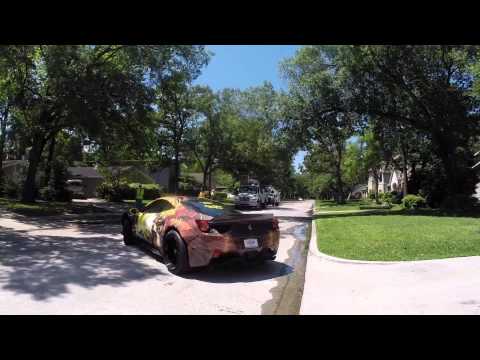