Mircea Mazuru
ICEing is when an internal combustion engine (ICE) vehicle owner blocks a charging station reserved exclusively for EVs. Whether someone does it because they're in a hurry or out of spite, it's still irritating.
7 photos

We have covered several ICEing incidents here on autoevolution, from a Ram that "identifies as a Prius" to an entire station blocked by cars. Today, we're looking at two other cases in Boisbriand, Quebec.

According to Drive Tesla Canada, one of its readers pulled up to a Supercharger charging station in the Montreal suburb and was surprised to find a large white Chevy Silverado 1500 High Country parked in a reserved space.

Want to know the wildest part of all? Not only did the truck completely block access, but it was also left idling with no one inside, as the owner was shopping close by. Why just block an emission-free vehicle from charging when you can also pollute the environment some more and waste precious fuel? What's more, leaving your vehicle in an EV charging spot in Quebec will lead to a $125 fine and your car being towed, but that didn't seem to scare the truck driver.

In case you find this hard to believe, the EV owner recorded a video and shared it on YouTube. You'll find it below.

Amazingly, this isn't the first time this has happened in Boisbriand. Less than 24 hours later, another person captured a picture of a Lamborghini Huracan blocking the same stall. This likely occurs because the station is close to a store, but it's no excuse for creating this inconvenience.

Maybe a wise move would be to use the solution that Tesla adopted in China, where ICEing was widespread. To tackle this problem, the EV giant started to deploy floor-blocking devices as early as 2019. They pop up from the floor and prevent other cars from parking in front of Supercharger posts. Initially, you had to unlock the devices from a third-party app, which complicated the experience, but Tesla integrated it into its mobile app since it started installing the system in every new charging station. This move eventually solved the phenomenon.

Hopefully, people will be more mindful of other road users and stop ICEing, and this measure won't be necessary. 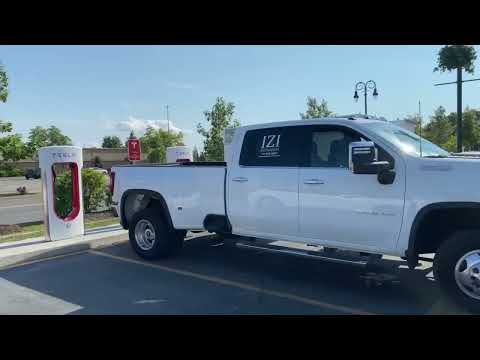