5 This Is How Much the 2023 Nissan Z Costs in Canada, You May Want to Get Yours From There
Car video reviews:
Coverstory

The second-generation 300ZX is often dismissed as just another Z even though it’s an important one of those. Birthed under Project 901, the global strategy that also gave us the S13 Silvia and R32 Skyline GT-R, the Z32 cemented Nissan’s image as a performance car manufacturer.
13 photos

A radical departure from the Z31 that ran between 1983 and 1989, this fellow is rocking a completely revised aerodynamic profile. Under those beautifully tapered lines, you’ll find things like Super HICAS four-wheel steering and a selection of naturally-aspirated or twin-turbocharged mills.

The VG30DETT is the one that everybody and their dog wants to have, a force-fed lump that combines iron for the block and lightweight aluminum for the heads. JDM cars were listed with 276 horsepower due to a gentleman’s agreement between Japan’s largest automakers. In truth, it’s developing in the ballpark of 300 horsepower, give or take a few ponies.

300ZX follows the numerical convention initiated by the 240Z, featuring a displacement of 3.0 liters. The X signifies luxury in pretty much every other market outside Japan, where it was marketed as the Fairlady Z. Praised by critics, this blast from the not-so-distant past was hailed 1990 Import Car of the Year by Motor Trend. It was ranked by Car & Driver on their 10Best list for seven years, which says a lot about the often-dismissed 300ZX.

Replaced by the naturally-aspirated 350Z in 2002, the Japanese sports car dominated the IMSA GTO and GTS categories between 1990 and 1995 with Steve Millen behind the steering wheel. Two reputable tuners from Japan, namely JUN Auto and BLITZ, created the fastest 300ZX in the world, clocking 260 mph (approximately 420 kph) at the 1995 Bonneville Speed Trials.

Pixel artist Marouane Bembli, a.k.a. The Sketch Monkey, is understandably a fan of the 300ZX. With the help of Photoshop, he imagined the iconic sports car with a few bits and pieces from the 21st century. The most obvious differences come in the guise of LED headlamps with a simple lighting signature, larger wheels and brakes, lower-profile tires, and slimmer caps for the side mirrors. The headlamps, by the way, come off a pickup truck.

Gloss-black lower trim, a power bulge on the hood, flush door handles, and a more swooping roofline pretty much sums up this quirky design study. 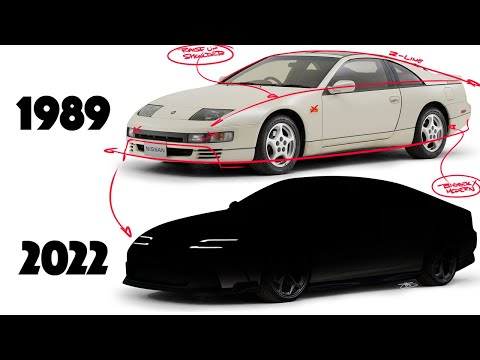