A fleet of giant 3D-printing robots is now working on the largest community of 3D-printed homes in the world, with reservations for the houses being scheduled to begin soon.
8 photos

3D printing has evolved tremendously over the years and we are now seeing machines capable of building structures that continue to increase in size and complexity. U.S.- based ICON is one of the companies that aims to revolutionize the world via 3D printing and is now involved in one of its most ambitious projects: a community of houses built entirely by its concrete-spitting machine, the Vulcan.

For those who are unfamiliar with the Vulcan system, it is an 11.5 ft (3.5 m) tall 3D printing machine that can print structures measuring up to 3,000 sq ft (279 sq m) out of a type of polymer concrete called Lavacrete. ICON has been using the Vulcan for years now, including for printing durable, sustainable dwellings, with the housing development in East Austin, Texas, being just one example. Those houses are advertised as more resilient than conventional ones, being able to withstand fire, wind, and floods.

Now, as announced a year ago, ICON and its homebuilding partner, Lennar, are taking things even further, kicking off the construction of what is boasted as the largest community of 3D-printed homes to date. It will be located in Wolf Ranch, Georgetown (Texas), and will consist of 100 houses built with the help of advanced robotics and software.

Commenting on the project, Jason Ballard, ICON’s CEO, stated that this is the first time in the history of the world when we’re witnessing a fleet of robots building an entire community of homes, which are better in any way than conventional ones, from design to the level of comfort, and strength. He also added that he envisions a future in which robots and drones will build entire neighborhoods and even cities.

The 3D-printed homes are designed in partnership with BIG (Bjarke Ingels Group), will be energy-efficient, and will come in eight floor plans with 24 unique elevations ranging from 1,574 sq ft to 2,112 sq ft (146 sq m to 196 sq m) of living space. They will offer three to four bedrooms and up to three bathrooms. In addition to rooftop solar panels, the houses will be equipped with Lennar tech such as ring video doorbells and smart, WiFi thermostats. Wolf Ranch residents will also benefit from other amenities such as recreational parks, pools, and more.

ICON says that reservations for the 3D-printed houses will be open next year, with prices being anticipated to start from approximately $450,000. 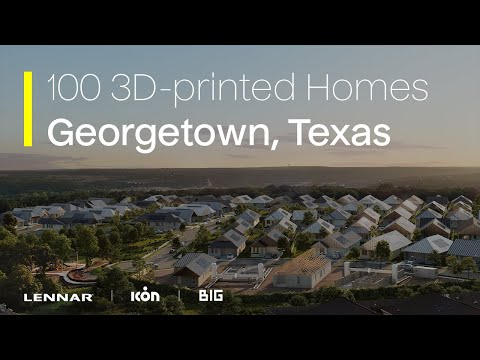