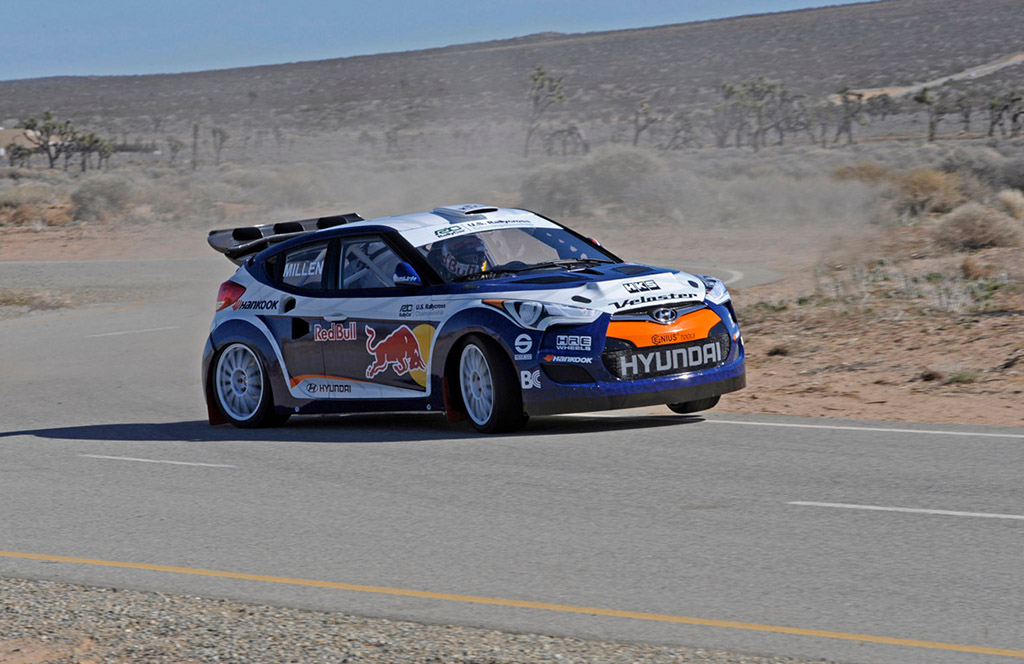 Rhys Millen just got himself a new machine/ the new segment-redefining Hyundai Veloster just got itself a new top driver. You can put it any way you want, but here is the fact: Rhys Millen will use a rally incarnation of the Hyundai Veloster for this year’s Rallycross Championship, as well as for the Summer X-Games, where the vehicle will also be manhandled by motocross rider Robbie Maddison.The vehicle made its debut at the Chicago Auto Show.

Hyundai will build a second vehicle that will be shared by Maddison and rally driver Marcus Dodd, who will also take part in the US Rallycross Championship, as well as a front-wheel drive incarnation of the racer, which will be used for PR stunts (aka driven by celebrities).

But what monster are we talking about exactly? We’ll start with the muscle. All four wheels are receiving 500 hp and 600 lb-ft (813 Nm) of torque from a 2.0 liter four-cylinder unit that uses a HKS turbocharger and works with a six-speed sequencial gearbox.

As for the rest of the car, you can expect the usual rallying treatment and more (this was applied by Rhys Millen Racing): less weight (the car tips the scales at 2,656 pounds/ 1207 kg) through the use of carbon/Kevlar body panels, a stripped interior, a roll cage, racing suspension, 18-inch HRE wheels and a beefy braking system that uses 14-inch rotors up front and 12-inch rotors at the back, as well as six-pot grabbers.

"The Veloster Concept inspired me to expand Hyundai's motorsports program back into their routes of rally," said Millen, professional race driver and founder of RMR. "We've transformed the Veloster's lightweight, rigid architecture into a rally car with an engine producing 500-horsepower and 600 lb.-ft. of torque. We hope some of the performance learning's from the Veloster rallycross program have a role in the development of future Veloster models."