The Infiniti Q60 can be had with two powertrain options, including a 3.0-liter V6 twin-turbo engine that Nissan will utilize in the all-new Z car. This particular example of the breed develops 300 horsepower on the nose and 295 pound-feet (400 Nm) from 1,600 through 5,200 revolutions per minute, figures that aren’t shabby for a D-segment premium coupe.
6 photos

Also equipped with all-wheel drive and a seven-speed automatic transmission, the Infiniti Q60 tips the scales at 3,915 pounds (almost 1,450 kilograms). That’s way more than the weight of the unlikely contender on the other side of the runway, a Hyundai Veloster N hot hatchback fitted with a dual-clutch transmission featuring eight forward ratios and very clever drive modes.

N Grin Shift Mode is arguably the most interesting of the lot because it unlocks 18 more pound-feet of torque from the 2.0-liter turbocharged four-cylinder mill, 20 seconds at a time. 278 pound-feet (377 Nm) and 3,186 pounds (1,445 kilograms) of curb weight make for a tantalizing recipe, but on the other hand, please don’t forget that it’s a front-driven hot hatch.

It's also worth mentioning the pricing difference between these models can only be described as tremendous, but at the end of the day, they’re gunning for very different customers. With traction control turned on, sport mode engaged, and N Grin Shift Mode for the Hyundai, the first race starts with a much cleaner launch from the Infiniti. The Veloster N is catching up, but it fails to cross the line ahead of the all-wheel-drive Q60.

From a roll, the Hyundai shockingly demolishes the Infiniti twice with traction control turned off, which proves how much the weight and transmission matter in a drag race. With sport mode on and traction control off, the Q60 gets revenge from a dig, ending this series of races in an unexpected tie. 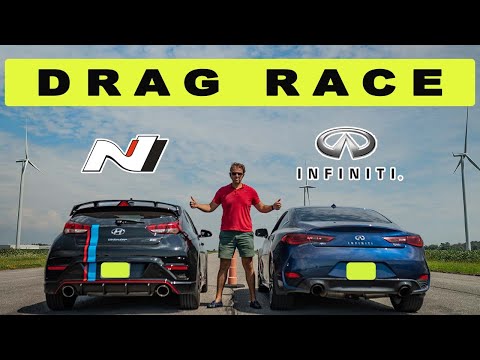