Hyundai and Kia are currently second to Tesla in EV sales in the United States. The flagships of the South Korean automakers are called Ioniq 5 and EV6, and both of them boast single-motor RWD as standard.
7 photos

The Ioniq 5 and EV6 in the featured clip are specified with all-wheel drive, which bumps up the output to 320 horsepower and 446 pound-feet (605 Nm) of torque. It’s definitely enough for jacked-up hatchbacks that pose as crossovers, but the question is, which is the quicker on the quarter mile?

Heavy is the word you’re looking for, but despite their compact footprints, do remember that both feature a truckload of battery cells instead of a fuel tank. Also worthy of note, AWD models come with a heat pump that operates like a fridge in reverse. More specifically, two radiators extract heat from the outside, the system compresses that air to further heat it, then use it for heating the cabin. Waste heat from the motors and battery is also used. The heat pump’s air conditioning system combines air- and water-cooling mechanisms to increase cooling performance. Clever, isn’t it?

Anyway and anyhow, the Ioniq 5 all-wheel drive claws in better off the line in somewhat damp weather. The Hyundai keeps the gap steady as both cars approach the finish line, taking the win rather effortlessly. But from a roll, performed at 30 miles per hour (50 kilometers per hour), the EV6 all-wheel drive asserts dominance, although not by a huge margin. Both vehicles cross the finish line pretty much right beside each other, which is understandable for they use the same platform, motors, batteries, and 255/45 R20 tires. 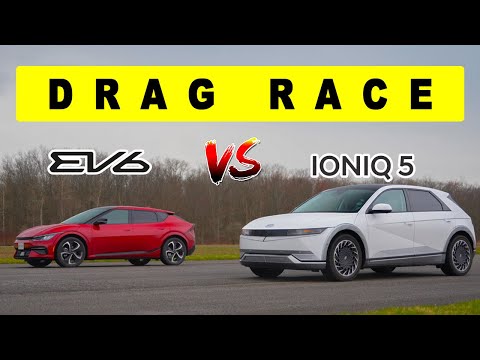