Vlad Mitrache
Watching 1,000 hp supercars racing each other can be fun, but sometimes it's nice to get back down to Earth and see slightly more affordable cars battling it out for top acceleration bragging rights.
10 photos

We say "slightly more affordable" but in this case, we're basically looking at the very entry-point into the world of performance-oriented cars. Look all you want, you won't find anything with a sporty pedigree beyond the price point of a small hot hatch, and even calling some of these "sporty" can sometimes feel like a bit of a stretch.

The great thing about the segment, though, is that you'll find a lot of variety. All cars have turbocharged engines these days (Renault was the last to tease us with the naturally aspirated 2.0-liter Clio RS, but even the French have had to cave in eventually), but their displacement and number of cylinders vary. And that's before we even get to their transmissions.

So, the Hyundai i20N has the same number of cylinders as the Polo, four, but nestled inside a smaller, 1.6-liter block. The turbocharged unit produces 204 hp and 203 lb-ft (275 Nm) which it then sends through a six-speed manual and a limited-slip diff to the front axle. Its 204 hp may not sound like much but the i20N is actually the most powerful of the group - and, with 2,623 lbs (1,190 kg), it's also the lightest.

The Ford Fiesta ST's specs are not a great departure from the i20N's, but there is one important difference: it has a three-cylinder engine. At 1.5-liter, it's also slightly smaller but the output is similar – 200 hp – and the rest of the setup involving the transmission is identical.

The Volkswagen Polo GTI feels like the grown-up of the group. It gets the biggest engine in this lineup – a 2.0-liter four-cylinder unit – but even though it has the same displacement as the Golf R, the output is limited to 200 hp. It's also the only one with an automatic transmission – and a double-clutch one, to boot – which, in theory, should give it a huge advantage. There are, however, two drawbacks: it's by far the heaviest weighing 2,987 lbs (1,355 kg), and it lacks a limited-slip differential on the front axle.

Given how different the cars are, each with its pros and cons, it's difficult to predict the outcome of this race. You'd be tempted to give it to the Polo GTI for its DCT, especially since the weight can be offset by its massive torque output of 236 lb-ft (320 Nm), but you wouldn't do it wholeheartedly.

And you'd be right because coming up with an overall winner even after four standing quarter mile runs, four rolling races with various settings, and a brake test is still surprisingly difficult. Maybe we don't even need to crown any of the cars and just highlight the fact the Hyundai i20N is a very impressive package instead. You know what to do with the video below. 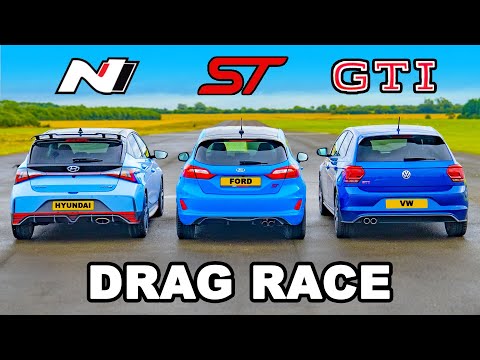