Hyundai Elevate Concept Can Walk Like a Reptile, Switch Bodies and Climb Walls

The fear of seeing machines moving like living creatures is something inexplicably embedded in our brains. Perhaps it’s a remnant genetic memory of an alternative past when spider robots destroyed us, or a premonition of a time when they will.
10 photos

Either way, even when someone creates a walking robot with the sole purpose to help out in dangerous situations, our brains instantly react as if they’ve seen something horrible.

At CES 2019 in Las Vegas, South Korean manufacturer is showing something exactly like that: a car-robot created as a means to give a helping hand to first responders in case of emergency, that looks straight out of a horror movie.

The thing on display at the Las Vegas Convention Center is called Elevate and has been classified by Hyundai as an Ultimate Mobility Vehicle (UMV). Elevate is, in fact, a platform which can use a variety of bodies depending on its intended purpose.

But that’s not the thing that makes this vehicle unique.

The concept has wheels like any other car, sure, but they’re mounted at the end of articulated robotic legs, meaning it can both drive like a car a walk like a living creature. In fact, says Hyundai, the disposition of its limbs make it capable of “both mammalian and reptilian walking gaits.“

The way in which the vehicle’s means of locomotion has been built allows it to drive on the road at highway speeds, but also to do things impossible for existing cars: climb a five-foot wall, step over a five-foot gap, walk over otherwise insurmountable terrain and achieve a 15 foot wide track width, all while keeping the people riding in it completely level.

The carmaker claims it spent three years working on this project, completed together with open innovation business arm, Cradle.

For now, however, plans to turn it into a production version have not been announced, so it’s unlikely we’ll see it on the road or on our homes’ walls anytime soon. 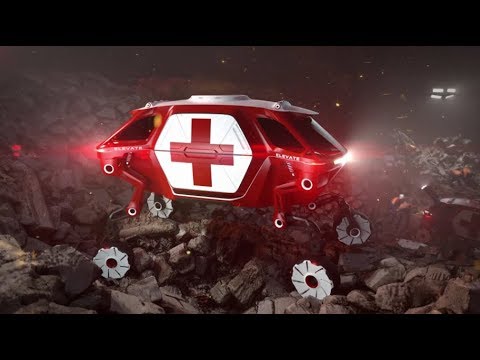