2 NASA’s Supersonic Aircraft Is in Pieces on a Floor, Massive Nose Leaves the Party

Aviation regulations need to catch up with supersonic and hypersonic technologies that are advancing at the speed of light. A Canadian company that developed an innovative turbo-ramjet engine will test it on a Mach 5 spaceplane, a demonstrator that is paving the way for future spacecraft.
6 photos

Space Engine Systems (SES) is ready to demonstrate its innovative technology, in flight. The chosen location is Lynn Lake Airport in northern Manitoba, Canada, where SES will drop its ramjet demonstrator vehicle from a stratospheric balloon. The aircraft is likely to make waves, at least for its unconventional name – Sexbomb.

Sexbomb is only the demonstrator's name. It will be followed by Hello-1, a spacecraft prototype that can carry payloads to low earth orbit, and Hello-2. The latter is a spaceplane that can carry heavy loads to low Earth and geosynchronous equatorial orbit and the lunar surface.

Space planes are vehicles that can fly like airplanes in the Earth's atmosphere and operate like spacecraft in outer space. According to SES, these types of flying machines could have many essential applications in the future, such as medical ones. For example, the Hello-1 could transport human organs for transplants, flying from Toronto to Edmonton in just 30 minutes.

Also, the company hopes to launch crewed missions in the next three years, at much more affordable costs compared to space tourism, “so that more Canadians will be able to join William Shatner as true astronauts.”

The DASS GNX that will power Sexbomb, Hello-1, and Hello-2, is an engine that can operate as a turbojet from zero to Mach 3, and a ramjet from Mach 3 to Mach 5, which means that it can function in a variety of conditions compared to a separate turbojet or ramjet.

The official date for the Sexbomb demonstration hasn't been set yet, but the Canadian company hopes it will happen by the end of the year, with flight tests for the Hello-1 space plane scheduled for 2023. 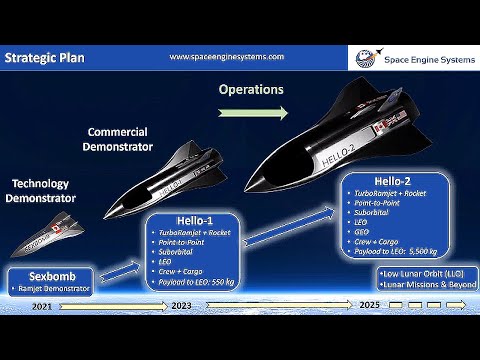