The Hyundai Nexo managed to break a world record for the longest distance traveled by a hydrogen-powered car on a single tank, covering a distance of 551.5 miles (887.5 km) from Melbourne to the Australian outback.
29 photos

Behind the wheel of the Korean crossover was none other than Australian rally driver Brendan Reeves, who started his journey with the Nexo from the Essendon Fields in Melbourne. After driving as efficiently as possible for 501 miles (807 km), he arrived in Broken Hill with plenty of range still available according to the vehicle’s trip computer.

He then continued driving to Silverton, an outback town on the outskirts of Broken Hill, which, fun fact, was where the 1980s post-apocalyptic action movie Mad Max 2 was filmed. Once there, he continued for another some 37 miles (60 km) before the Nexo’s hydrogen tank was actually depleted, as the car stopped on the Wilangee road, beyond Eldee Station.

What’s interesting is that a separate GPS unit inside the Nexo registered a total of 561.3 miles (903.4 km) traveled, while Google Maps indicated 562.3 miles (905 km). However, for this test, the crossover’s trip computer was used as the official distance recorder.

“Being a rally driver, I’ve always wanted to achieve a world record, but I could never have guessed it would come about this way,” said Reeves. “As we set out from Essendon Fields in the early morning, I found Nexo immediately familiar and easy to drive – the controls are intuitive and easy to use, the driving position excellent and seats very comfortable.” 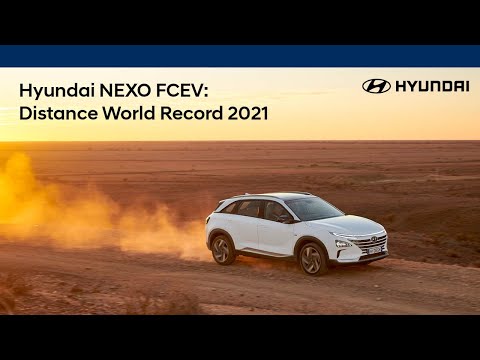