2 Fuel Cell Technology and Its Use in Cars

Hydrogen Fuel Cells Are a Scam Says Tesla Co-Founder, and Also Explains Why

Some car companies looked to be a little in doubt about what sort of alternative propulsion to go for. Toyota, for example, has been the first carmaker to make hybrid powertrains popular, but even though it had all this expertise, when it came to letting go of the internal combustion engine for good, it chose the hydrogen fuel cell solution over the battery pack. Why, you might ask?
1 photo
In theory, the hydrogen fuel cell sounds great. It's like nothing changes for the driver, except he drives a zero emissions car. He still goes to the pump, and he still fills up a tank with a liquid in a matter of minutes, only this way, the only thing coming out of the exhaust pipe is pure water. That sounds like the setting for an automotive fairy-tale, doesn't it?

Well, when things appear to be too good to be true, they usually are. The main drawback for the hydrogen fuel cell option is that we haven't really figured out an efficient way of producing liquid hydrogen. The gas may be abundant on Earth and even more so in the Universe, but it's usually tangled up in more complex chemical components, so its first needs to be isolated. The most common practice is water electrolysis, which requires the consumption of electric energy.

Once the hydrogen is isolated, it needs to be compressed in order to become liquid (and take up less space). This is also done with energy consumption. Finally, the liquified gas has to reach the pumps where you and I can fill our pressurized tanks with it - its transport will also consume some energy. So, even if we assume that all these processes are carried out without any negative effect on the environment, it's still a very complicated and wasteful way of producing fuel that is then used to create electric energy.

It's not the first time somebody at Tesla told us how bad hydrogen fuel cell cars are, but this time it's more than just a rant. Marc Tarpenning is one of Tesla's co-founders and during a recent podcast, he expressed his feelings on the whole fuel cell situation and why he thinks it's being supported by the big energy companies (a bit of conspiracy theory never hurt anybody, especially when it's got facts to back it up). In short, he believes the liquid hydrogen is an inefficient solution, which is wonderful news for those who sell it.

Below you can find a transcript (via Electrek) of part of his speech, and you can watch the whole video (well, it's actually just audio) further down. It's definitely worth it.

"If your goal is to reduce energy consumption, petrol or whatever resource, you want to use it as efficiently as possible. You don’t want to pick something that consumes a lot for whatever reason, and hydrogen is uniquely bad.

There’s a saying in the auto industry that hydrogen is the future of transportation and always will be. It’s a scam as far as I can tell because the energy equation is terrible. It’s just terrible.

Electrolysis is the most common method. You put electricity in water and it separates it, but you are pouring energy in order to make hydrogen, and then you have to compress it, and that takes energy, and then you have to transport it to wherever you actually need it, which is really difficult because hydrogen is much harder to work with than gasoline or even natural gas – and natural gas is not that easy.

And then you ultimately have to place it into a car where you’ll have a very high-pressure vessel which offers its own safety issues – and that’s only to convert it back again to electricity to make the car go because hydrogen fuel cell cars are really electric cars. They just have an extraordinary bad battery.

Hydrogen is an energy carrier and not a primary fuel source on this planet. Maybe out somewhere in the universe, but not on a terrestrial planet.

When you add that all up, it turns out that the amount of energy per kilometer driven is just terrible. It’s way worse than almost anything else you can come up with – which I always suspected is one of the reasons why the energy companies have long been big proponents of it.

When we were raising money the first time, we had very carefully gone through the math to understand fuel cells because there was a bunch of money going into fuel cells at the time and we also looked at biofuels and ethanols – we sort of went down the whole list to figure out what the most energy efficient system was – which turned out to be battery electric cars." 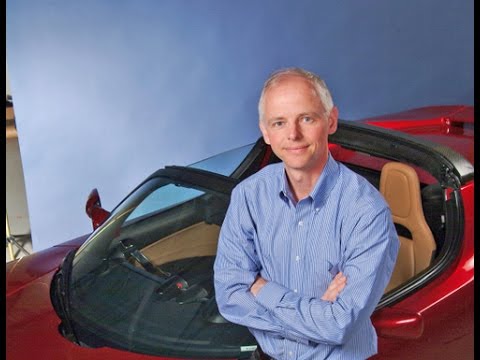