1 This Pickup Truck of the Sky Is Half Helicopter, Half Bush Plane, and All Business

3 LiDAR-Packed Elios 3 Mapping Drone Knows How to Take a Hit, Gets Back Up After a Collision

4 Fish-Inspired, Hitchhiking Drone Switches Between Water and Air in Less Than One Second

5 A Different Kind of VTOL Nails Its First Test Flight, Uses a New Type of Thrust System
Car video reviews:
Up Next

With a patented cyclorotor placed in its center, positioning sensors that help it avoid obstacles, and quickly swappable payload arms, Astria wants to take over our risky jobs, whether they involve working on power lines, or inspecting bridges, towers, and wind turbines.
7 photos

Astria is not your average drone but an “up-close and touch-capable” aerial platform that uses patented technology. Instead of constantly tilting to move, which causes drones to become unstable, especially in windy conditions, Astria uses its cyclorotor for lateral control. The cyclorotor is capable of rapidly changing the direction of thrust and makes the drone capable of operating in wind, without having to lean. It can also maintain its stability and achieve a precise position up to inches.

Astria is made on American soil by Pitch Aeronautics, being built in Idaho and using almost entirely U.S. components. In addition to relying on superior moving technology, the precision drone is also designed with convenience and portability in mind. All its parts are collapsible, making the drone easy to fit in a case and the back of a vehicle. Assembling and disassembling the platform can be done within minutes, without requiring any special tools.

The payload capacity of Astria is 5 to 10 lb (2.25 to 4.5 kg) and it is placed at the end of a sensor arm, away from the center, to keep the rotor safe. That arm is easily swappable, making the drone suitable for a variety of applications. Astria packs multiple sensors and optical flow cameras that allow the drone to see its surroundings, avoid any obstacles, and hold positioning even with the GPS disabled.

Pitch Aeronautics’ cyclorotor technology is already patented and the company also has a pending patent for the configuration of its drone. While Astria is first targeting the inspection market, its developers say this is just a starting point and they eventually plan to also move to other applications, such as industrial maintenance, defense, and more. But at this point, we are still waiting for info on Astria’s pricing and availability. 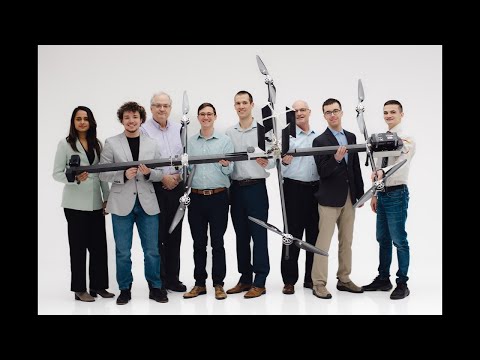