1 Take a Look Inside MY Lusine, Heesen's $70 Million Spectacular Superyacht

“Resilient” is what you’d call someone able to bounce back from adversity, whether illness or any other kind of misfortune. “Illegal” is the term being thrown around in this particular case, where the superyacht owned by a sanctioned oligarch is being offered for sale in an off-the-market deal.

Since the start of the war in Ukraine at the beginning of the year, many other states not willing to take a direct part in the conflict have condemned Russia’s invasion of its neighboring country by imposing sanctions. In theory, these sanctions would discourage Putin and his allies from the war by cutting off funding for the war effort. In practice… well, let’s just say that things are far more complicated than that.

One of the most publicized aspects of sanctions was the seizure of luxury assets, including superyachts, car fleets, private jets, and premium real estate. In the case of superyachts, which incur massive costs on a weekly basis, problems became apparent right away because local authorities that seized them were (and are now) forced to pay for maintenance, docking, and all manners of assorted fees. The unprecedented legal situation has given way to various attempts on the part of the owners to find loopholes around the sanctions, whether by suing authorities for the right to use the yachts or allegedly buying them through third parties to get them back.

This could be one such case: the proposed hushed sale of MySky, a beautiful, fully custom vessel delivered by Heesen in 2015. MySky has been in the news before in recent months because it’s supposedly owned by Russian “tobacco king” Igor Kesaev, who was put on sanctions lists in the UK and the EU in April this year. Coincidence or not, in May, MySky disappeared in the Maldives, turning off its AIS tracking (automatic identification systems).

At the beginning of September, reports started making the rounds that MySky was being offered for sale through Burgess, a Europe-based luxury broker. One month later, Reuters got hold of a leaked email from U.S.-based Merle Wood & Associates, which calls itself “one of the premier yacht brokerage firms worldwide.” It mentioned the listing of MySky for €29.5 million ($29.3 million at the current exchange rate) and asked that it not be publicly advertised.

Reuters reached out to the brokerage firm and was instead diverted to Burgess, of which Merle Wood said was the primary brokerage representative. Burgess, for one, would not comment on the reported planned sale, directing the media outlet back to the U.S. company. Shortly after Reuters reached out, Burgess took the listing for MySky as a charter vessel offline.

One of the things about superyachts belonging to sanctioned individuals is that they can’t be sold off by their owner or any other representative acting on their behalf. The situation is a bit murkier with superyachts whose exact direct beneficiary has not been determined beyond any trace of doubt (an oftentimes-impossible action in itself), but even so, brokering a deal for a vessel known to be associated with a sanctioned individual is a big no-no. This would apply to Merle Wood, which is based in the U.S. where Kesaev is not currently sanctioned, but especially to Burgess, as its involvement would contravene European sanctions (because it’s a European entity).

After the story got out, Burgess rushed to point out that it wasn’t doing that: MySky is not associated with any sanctioned individual, a spokesperson for the brokerage says. In fact, the direct beneficiary of the vessel is not on any sanctions lists, which they have been able to establish after doing “full due diligence.”

Heesen, the shipyard that built MySky, is staying mum on the topic, as most shipyards do: the identity of their customers is never made public if they don’t want to. But there’s this: in April 2021, a Dutch story noted that “the Kesaev family is well known to Heesen, having commissioned Sky and MySky over the past decade.” A spokesperson for Heesen confirmed the accuracy of the statement to Reuters, but the story itself went offline after the inquiry. MySky has never changed hands since 2015, at least not as far as online records of ownership go.

You don’t have to be some sort of tinfoil-hat-wearing conspiracy theorist to see that the waters are getting muddled around MySky. Based on the facts, it definitely looks like someone tried to sell this gorgeous, one-of-a-kind superyacht in secret and got busted and called out by Reuters. That someone might be Kesaev, or this is just the biggest string of convenient coincidences. 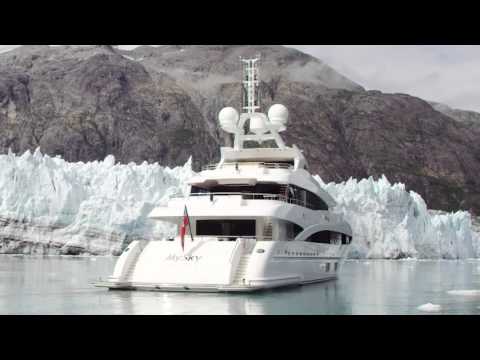