1 An Illegal $590K Loan Will Buy You a Charger, 2 Escalades, a Hummer, Prison Time

4 Electric GMC Hummer Will Not Be Shown on May 20, Goes into the Woods Instead

Hummer H1 vs Suzuki Jimny Drag Race Is No Contest, But the H1 Gets Revenge

You know that thing people tell you when you're feeling down? Something like "cheer up, there's somebody in the world who has it worse than you."
37 photos

That has to be one of the lousiest encouragements that anyone has ever come up with. It's not just wrong on a moral basis - you're essentially encouraged to feel better because others are miserable - but I suspect it also doesn't work. I don't need to be told about how bad others are doing, I need to hear how wonderful my life is, even if it's a lie.

It's kind of the same with any type of competition. You can be terrible at it, but there's always somebody who's even worse. You just need to find them and make sure they are always around whenever you are competing, just to make you look better.

That's what the Hummer H1 is to the Suzuki Jimny when it comes to drag racing. With its 1.5-liter naturally aspirated engine, the little Japanese two-door SUV isn't going anywhere fast. It packs 101 horsepower and 96 lb-ft (130 Nm) of torque, and even though it weighs ridiculously low for a modern vehicle (2,502 lbs / 1,135 kg), that's still not going to be enough to make it even remotely quick.

Just by reading the engine specs, you can instantly realize it's not meant to accelerate quickly. There are two-liter four-cylinder turbodiesels these days that produce higher amounts of power, so that's a low-stress unit designed for reliability ahead of anything else.

And it shows. The Hummer H1, with its interior larger than many Tokyo hotel rooms, is no match for the Jimny in a quarter mile race. With a time of 27 seconds, it's hard to imagine what the vehicle that would lose to the H1 would even look like. A fully loaded semi going up a hill?

However, just as you're probably about to dismiss the Hummer H1 altogether, Matt accidentally manages to find one test where the behemoth outperforms the Jimny, and it's not thanks to its weight. If anything, it's in spite of it. We won't ruin that one as well, so you'll have to watch the clip. 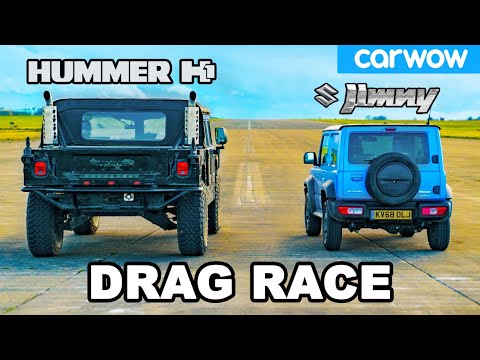