3 There’s a Bit of Oxygen Now on Mars, and It Was Made by Perseverance

By now, you’ve heard of the Artemis program that NASA has been working on. Good. But did you know that there’s a whole lot of 3D printing involved? Apparently, that’s one of the first activities to be undertaken once on the natural satellite.

For a few years now, NASA has been working hand in hand with teams all over the world to further the development of the Artemis program. One team in specific, Texas-based ICON, is looking to 3D print some of the first settlements and structures to be found on the Moon.

Honestly, NASA needs no introduction, but very few people have heard of ICON. To understand why NASA chose to work with this company to further space travel and occupation, understand that at this moment, ICON is selling 3D printed homes.

With the announced Project Olympus meant to be building structures on the Moon, a few problems also arise. One of the main issues is that of building materials. What the hell is there to use on the Moon? Well, dust, and plenty of it.

The Vulcan is currently using a material known as Lavacrete, which is basically a type of flowing concrete that hardens quickly to create a wall layer by layer. But imagine what it would be like to transport millions of pounds of concrete to be used for building. That’s a big no-no.

So to figure out how to get to printing on the Moon, ICON and students from ten colleges across the U.S. have been hard at work figuring out how to print in space. Back in October 2020, ICON, partner MMPACT, and a group of students got together and built a prototype landing pad that is built exactly from materials found on the Moon. What!? Does that mean it's friggin official, we can now build on the Moon? Theoretically, yes. Practically, there are still a few hurdles to overcome. One of which is the necessity of water.

“This is the first milestone on the journey to making off-world construction a reality, which will allow humanity to stay - not just visit the stars,” states Michael McDaniel, ICON’s Head of Design, about the progress so far.

A few weeks ago, on the other hand, the three groups reunited to create another 3D printed rocket pad, this time to test the construction under static fire from a rocket motor.

The pad concept, called Lunar Plume Alleviation Device, focuses on solving problems caused when an engine exhaust meets a dusty lunar surface. To do that, the pad is set up in a two-layer design. The first layer acts as a landing pad for a rocket, while the second layer helps divert exhaust flow towards the structure's exterior while keeping the dust contained in a determined parameter.

During the tests, the teams used instrumentation to measure temperatures, strains, and exhaust flow to determine if any changes or improvements can be made. The results are yet to be published.

Honestly, I feel humans are now closer than ever to fulfilling their dream of colonizing other planets and moons. With a few more trials such as these, I feel that I might see a moon colony in my lifetime. Keep up the good work, young minds! 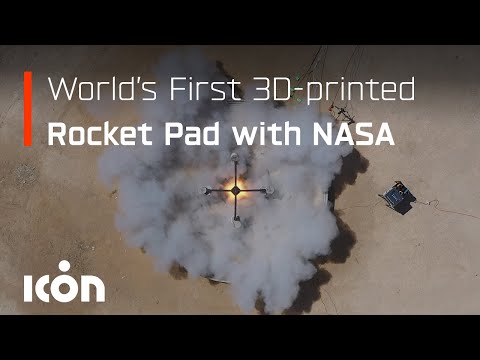