3 Production Hennessey Venom F5 Has Arrived, Should We Prepare for a New Record?

Aurel Niculescu
The Texas tuner has been extremely interested in checking out the all-out performance of a European supercar these early days of 2021. However, it’s now back to domestic business as it throws a couple of Mopars in the mix: one with an almost untraceable HPE900 upgrade and the other in a very stock configuration.
24 photos

Given that just about anyone can have an unassuming Charger treated to the recent and stealthy HPE900 performance upgrade, it would be fair to assume the other Dodge is going to succumb to its charms on the street easily.

But we already know that even though Hennessey sometimes indulges in apples to oranges comparisons, it’s also looking to deliver the most entertaining appearances whenever possible. Therefore, the other Mopar they have casually lying around (actually, it’s there for a very specific reason, more on that in a second) is the mighty Dodge Challenger Demon.

So, they’re actually pitting against the HPE900 Dodge Charger SRT Hellcat something with “over 800 horsepower, big blower, big air scoop, big power, big performance” and entirely capable of performing “a wheelie from the factory.” And they’re trying to be as fair as possible, replicating the usual conditions of a street encounter at the Pennzoil Proving Ground.

That means they settled for a 50-mph (80-kph) roll drag race in normal configuration – which is also why both cars were running on the tires they come equipped from the factory. After a few rumbling and bumbling views of both cars and the Hennessey guys doing their marketing thing, it’s finally time for a couple of races from the 1:45 mark.

It will come as a surprise to no one that Hennessey’s HPE900 Charger wins both in an unequivocal manner. We’re left with the impression that whoever sent the Demon to the aftermarket specialist might call them out for a rematch once the Challenger also goes through its own HPE1000 upgrade... 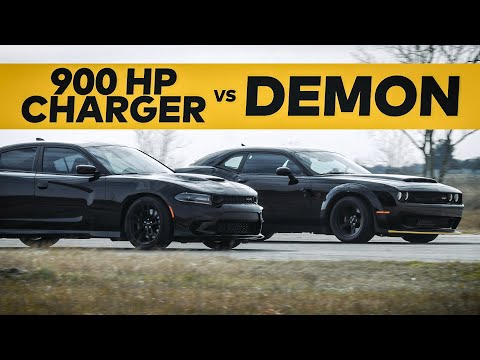