5 2001 Lamborghini Diablo Will Have You Selling Your House
Car video reviews:
Up Next

Nobody can deny that Audi makes everything better, so how does the Diablo GT fit into Lamborghini’s modern history?

How Will History Judge the Lamborghini Diablo GT?

Back in the late '90s, Lamborghini was owned by an Indonesian-Malaysian conglomerate. They were making money on the Diablo, but their only model was a creation of Chrysler with styling by Gandini. While they were on the ropes, a last grasp at greatness would be to revise their only car in order to look appealing to new owners.

These heady days were spearheaded by Ferdinand Piech, whose leadership of Volkswagen was at war with his cousins at Porsche. Adding Lamborghini to the Volkswagen empire would give him leverage against his family, and that’s why the first-generation Diablos represent the last supercars from an independent Lamborghini.

Development was underway before the Germans came calling, and it essentially gave Lamborghini a blank check to transform the Diablo into something Mr. Pagani and Mr. Gandini could be proud of. While the chassis remained the same (on paper), almost every exterior and interior part was examined, tested, and revised if needed.

Somewhere deep in a German lab, the Diablo was dissected down to the valve stems and found deficient in almost every measure. What was needed was an all-new supercar, and work began on what would become the Murcielago. In the meantime, Lamborghini needed something big enough for the motoring press to love, while satiating enthusiasts until the new car arrived. Enter the Diablo GT.

A smart move when considering the lineup for the Diablo’s 2nd generation was to eliminate the base model. The Diablo SV was introduced in ‘95, and it was so popular that it would now be their entry-level offering. It all started with 18-inch wheels becoming the new norm, and then the interior took inspiration from contemporary German fashion. The instrument cluster even had warning lights similar to those found on Bang & Olufsen home audio. By far, the most notable change involved borrowing Nissan’s headlights from their 300ZX.

While that would be fine for most, they needed a halo car to keep customers interested. Starting with unique body panels, carbon fiber was used up front to force air into the oil cooler. The massive rocker panel intakes would feed the transmission and brake coolers, while a roof scoop sucked boundary layer turbulence into the engine bay to cool the Raging Bull.

The Diablo GT is much wider than lesser models, but it's not obvious at first glance. They used optical illusions on the order of Walt Disney to placate timid owners, with OZ Racing suppling 3-piece wheels. Having nearly the same lip front to rear, the offset and backspacing allows the rear track to be much wider without hinting at the car’s abilities.

This is the first Lamborghini aimed at us enthusiasts. A carbon fiber interior with 4-point harnesses could be had with an Alpine touchscreen. Customers could choose from a myriad of gear ratio choices in their 5-speed manual while engineers worked on perfecting E-Gear for the Murci. Lamborghini knew the future was unavoidable, so they pulled out all the stops for this fitting tribute. Only a few have been imported because of the 25-year ban on great cars, so this is the one you need to be looking for.

A big thanks to John Temerian and his team from Curated who took class honors at The Amelia this year. If you have been on the fence regarding a 90’s supercar, the later Diablos are all that is right with the world. Stay with us for more great event coverage! 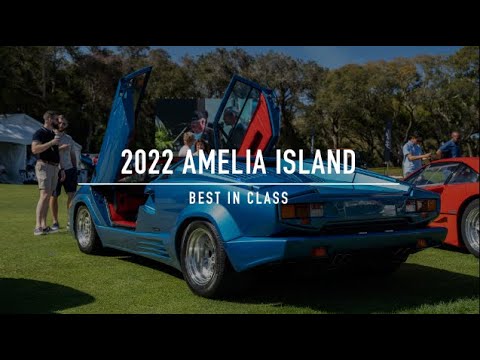