How Well Can the 2020 Land Rover Defender Deal With the Colorado Winter?

Let's face it: any video from The Fast Lane featuring their newly delivered (third) Defender is going to be a thriller as we expect something to go wrong with the vehicle at any moment.
1 photo
We're not going to go into TFL's experience with trying to buy a new Land Rover Defender because if you're not up to date with it, well, it's frankly your fault. Half the Internet knows about it, which is probably why Land Rover was so kind to them and offered a vehicle with a $16,000 premium free of any additional charge.

Let bygones be bygones, and let's focus on the present. In this case, that would be an SE Land Rover Defender 110 packing a straight-six turbocharged three-liter engine with 400 horsepower on tap and an eight-speed automatic transmission. Not a bad setup, but the best thing about it is that, unlike the previous two vehicles, it's actually working.

With winter setting in Colorado, the team's plan to take their Defender "to hell and back" is going to have to wait until spring. At the moment, the SUV doesn't even have winter tires on, which is the bare minimum for any kind of vehicle if you're going to venture into the snow.

Instead, it has the Goodyear Wrangler ATs that can be specced from the factory. They are not mud and snow rated - and even if they were, they still wouldn't provide the same level of control as a set of full-blown winter tires. Luckily, the trail they are on isn't covered in that much snow, so the ATs should be alright.

But why leave that to chance when you can test it and know for sure? A quick push of the throttle sends the six-cylinder engine into overdrive, but between the traction control cutting in and the skidding while braking, it gets plainly obvious the tires are not what you want on your vehicle when everything around turns white.

Other than that, though, the Defender presents itself as a very good winter mobile, which was the entire purpose of the video. It's got heated seats and steering wheel - one of those features you think is too much until you get to experience and fully appreciate it - as well as a heated windshield, which is great for a quick defrost.

The Terrain Response System can make life easier by dampening the throttle response and making sure the SUV can launch with close to zero wheelspin regardless of how slippery it is. Another strong point is the air suspension with its adjustable ride height that makes banking unlikely unless the driver gets really carried away.

As for the downsides, there's only really one - well, apart from the steep price - and that's the weight. At 4,985 lbs (2,261 kg), the new Defender is not exactly the lard-mobile the older body-on-frame models like the Discovery and Range Rover used to be, but it's still a hefty machine. What that means is that getting it unstuck is going to require a lot of effort, and TFL knows better than anyone how tricky fitting a winch can be. 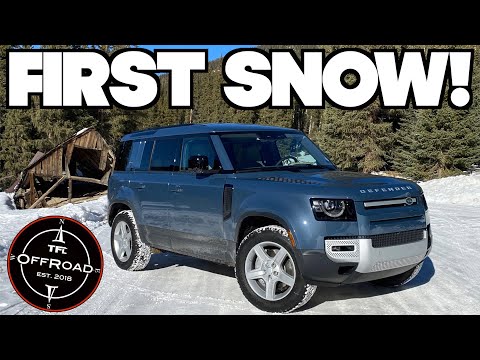