How to Read the Dashboard Lights

The dashboard, and particularly the instrument panel, represent the easiest way a vehicle talks back to its driver, allowing him to stay up to date with the status of the car and provide him with prior notice on potential mechanical problems. The dashboard items followed the same evolution trend as the whole car, migrating from standard light bulbs to more attractive and efficient LEDs or completely-digitalized dashboard components.

Take for example the head-up display, a technology developed to project important information such as speed, fuel consumption or the tachometer straight on the windshield. Getting back to the instrument clusters, their number increased significantly once car manufacturers developed new technologies regarding safety, engine management or miscellaneous car-related equipment. But more importantly, these tiny lights tracking the operation of the car can provide critical information that could protect you, your passengers and the other drivers on the road.

The number of instrument clusters is huge, mostly due to the fact that most car manufacturers used basic symbols and personalized them for their own models, although we all agree that standard ones would be useful for all drivers, no matter the car they own. That's why we've decided to create a list of the most common instrument panels used by different carmakers around the world, although it could be easily expanded into hundreds. 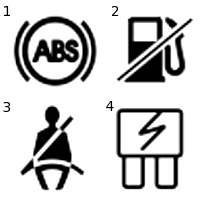 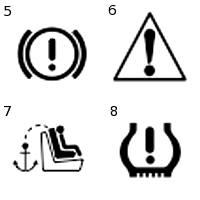 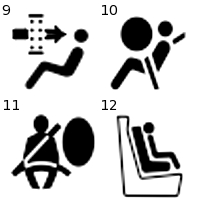 1. ABS warning light: it is turned on every time there's something wrong with the Anti-lock Brake System. Note that the ABS symbol is activated once the driver starts the engine but it's automatically turned off after a few seconds.

2. Low fuel notification: this panel is switched on if the fuel level gets very low and refuel is required.

4. Electrical problem warning: this light warns you that there's a problem with the electrical system of the car.

5. Brake system alert: the notification comes on if the electronic control unit detects a problem with the braking system

6. Warning light: it signals an unidentified problem with your car; it usually requires the car to be serviced.

7. Child seat indicator: if turned on, it informs you that the standardized child safety seat is attached

8. Tire pressure monitor: the warning is turned on in case of low tire pressure.

9. Air filter: usually installed on the center console but also found on the dashboard, this light informs the driver that a malfunction was detected with the passenger compartment air filter

10. Front airbag: the light monitors the front airbag and, in case it is turned on, signals a problem with it; it usually requires professional assistance.

11. Side airbag: same as the front airbag but intended for the side airbag

12. Child seat: this symbol informs the driver that there may be a problem with the rear-mounted child seat; similar to number 7 but used by different manufacturers 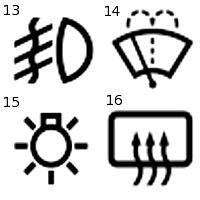 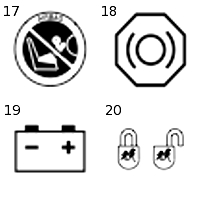 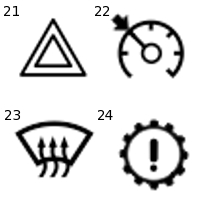 13. Fog beams indicator: it is activated and remains on once the driver turns on the fog beams

14. Windshield wash: the notification appears once the windshield wipers are activated

15. Master lighting switch - tells the driver that the there is a problem with one of the lights in the car

17. Child seat warning: similar to the other child seat notifications, it warns the driver that the child seat may be wrongly installed

18. Brake fluid malfunction: rarely installed on the dashboard, it unveils a problem in the brake fluid recipient

19. Battery warning: if this light is turned on while driving, it reveals a malfunction concerning the battery charging system

21. Emergency indicator: the notification is activated once the driver pushes the emergency button on

22. Cruise control: this light is turned on if the cruise control system is activated; note that it may differ by brand and car model

24. Drivetrain malfunction: if on, this light shows that the drivetrain has been damaged and the car needs to be serviced as soon as possible. 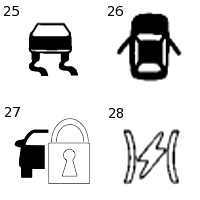 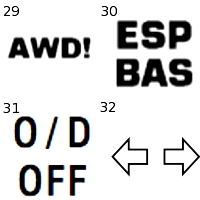 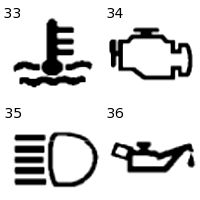 25. Electronic Stability Control: informs the driver that either the car is losing grip or that the stability control system has been switched off

26. Open doors indicator: this symbol is usually turned on just after the driver starts the engine and informs him that one or more doors are closed incorrectly

27. Anti-theft system: exclusively installed on Ford models, this symbol flashes once the Securilock Anti-theft technology has been enabled

29. AWD: with a pretty suggestive name, this light switches on once the all-wheel drive system is enabled

30. ESP/BAS light: exclusively found on certain Mercedes-Benz and Chrysler/Jeep models, if on it reminds the driver that either the electronic stability control system or the brake assist system are dealing with a faulty brake switch

31. Overdrive indicator: it shows the driver that the overdrive system has been turned off

32. Turn signals: surely the most known instrument panels, the turn signals are activated once the driver changes direction and uses the signal lever

33. Temperature warning light: it warns the driver of the possibility of engine overheating and usually demands the driver to stop the vehicle

34. OBD Indicator: member of the Onboard Diagnostics, this indicators reveals a problem with the engine or with the emissions and requires the car to be serviced.

35. High beam light: it is turned on once the driver activates the high beam mode of the headlights

36. Oil pressure warning: this notification is turned on if the ECU detects a problem with the oil pressure; the driver is usually recommended to stop the vehicle and service it as soon as possible.