2 Why Everyone Needs a Pur Sang Bugatti

3 NASCAR V8-Swapped Lamborghini Huracan Has Italian Body, But the Spirit of America

4 Which Cadillac CTS Is Right for You?

5 Chevrolet Racing Gives Us a Lesson in Logistics
Coverstory

One man’s vision from 1959 has found a new life with modern power, so here’s why you need to secure one of the 33 examples for this model year

Walter Troy was a mechanical genius who served in the Second World War. While overseas, he used his experience hot-rodding Model Ts to become the Chief Mechanic of the 167th Field Artillery Battalion. Serving in the Far East exposed him to European sports cars, and he came home to open Illinois’ first Jaguar dealer.

Needing something wild to advertise his businesses, he dreamed of winning Indianapolis in a new American roadster. The Troy Roadster debuted in 1959 and immediately took top honors from the motoring press. Sourcing a drivetrain from a wrecked 55 Corvette, the car packed a 283 V8 (4.6L) with dual quads backed by a 3-speed manual.

Praised by Hot Rod magazine along with the Road Runner Autorama show, it was a recipe for success. Hidden away for decades, Walter’s amazing build was the impetus for 7fifteen Motorworks who seek to build a 21st century example. Once the car was discovered in 2017, a collaboration of Scarbro Performance and Scarab Motorworks set out to reverse engineer the car. 7fifteen Motorsports was formed in 2019 bringing together the best from both companies.

Robert Kendall’s ecclectic collection is based in Three Lakes, Wisconsin and it is there they realized just how good this car really is. The 1.5” (38mm) tube frame chassis was much stronger than its contemporaries, and the hand-formed body incorporated cutting-edge aerodynamics that only required 30% improvement. That’s why they started with a bulletproof drive train.

Think about the heaviest parts of a classic car. Walter had to use what was available, so the engine, transmission, differential, and brake calipers were cast iron. He used solid axles with 4-link suspension to handle the weight, like most other racers of the era.

Starting where it counts, the team began with a concept for inboard suspension. QA1 stepped up to offer double-adjustable coil overs, connected by billet bell cranks to each corner. Wilwood’s 2-piece rotors have aluminum hats, clamped by 6-piston forged aluminum calipers front and 4-piston rear.

In keeping with this theme, aluminum also comprises a late-model CTS-V differential. It is commanded by a Tremec T56 Magnum transmission. It is a hardened example of the TR-6060 that is rated to handle 700 lb-ft (949 Nm) of torque. That’s what is required when you have the hottest version of the Chevrolet LS3 V8. This 6.2 is rated at 495 horsepower, but my own experience says this is very conservative.

With a leather interior of your choosing, you will tip the scales at only 2,200 lbs, or 997 kg. With some help from Tampa Tuning, this drivetrain offers 26 mpg in my car, albeit over twice as heavy. Therefore, we are looking at one of the most fuel-efficient cars that money can buy.

More than an engineering marvel, it is built for the perfect American road trip. Stewart-Warner gauges are backlit for night driving while 5V USB ports keep you connected. Perhaps the best feature for master drivers is the Wilwood brake bias control. You tell the brakes how and when to grip, a must-have for the failing infrastructure of North America. The 18” Halibrand replica wheels have vintage “kidney bean” slots while offering ample tire sidewalls for a comfortable cruise.

If it was me, I would have the chassis plated in dark chrome with the suspension powder coated bright red. To give it a classic sound, Chevrolet Racing offers the “ASA” camshaft with an unmistakable dirt-track idle. Finally, I would opt for heated seats to build the ultimate American roadster. Due to the complexities inherent with hand-built cars, only 33 will be offered this model year. Tell us about your ideal spec in the comments below! 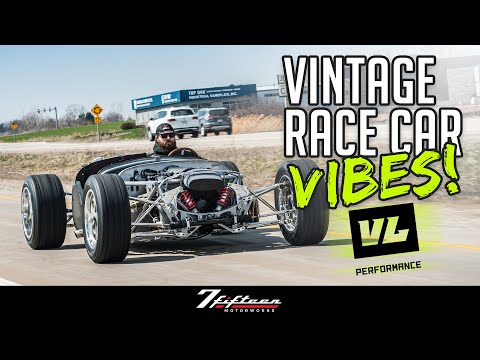