3 Mayweather Jr.'s NASCAR Team Was Penalized, You Can Easily Guess Why

5 Who Is Austin Cindric, the Newest Sensation in NASCAR?
Space Junk

NASA Finds “Best Evidence of Water and Waves” on Mars, No Alien Surfboards Yet

How To Experience the NASCAR Duel at Daytona

An annual tradition for many NASCAR fans, this year was incredible thanks to the hospitality of Chevrolet and the Daytona International Speedway
6 photos

If you have never been to a race, Daytona is the best place to start. Being a native “Florida Man,” Chevrolet has allowed me to experience several unique perks in return for being a loyal customer. This year, autoevolution was invited to watch these twin races that were used to determine the starting order of this year’s Daytona 500.

The infield is best described as the largest party you will ever attend. Campers, trucks, tents and the smell of BBQ permeate the 180-acre expanse. The centerpiece of the action is Victory Lane, where Chevrolet’s Daytona Experience Center. This 3-story pavilion begins with vintage GM products surrounded by appetizers. This year we were treated to see the original Firebird 1 turbine car along with new examples of Chevy’s 2022 lineup.

It was nice to mingle with NASCAR royalty from Austin Dillon to the hosts of Fox Sports while competing in tailgate games. The lawn measured roughly 100x100 meters, and it had RC cars, cornhole competitions, and a great place to watch practice sessions. From 4 to 6 pm, the ARCA series drivers and teams put on a great show. These guys, along with the Xfinity series offer incredible action without the stress of Sunday’s main event.

The second floor had a skybox suite with more food and drinks along with a great view of the trioval. It was here we saw driver introductions up close and personal, even if each one was paraded around in a base model Toyota Tundra. Walking up to the top deck, we could easily see all corners of the massive speedway, and it’s wild to watch the action a few seconds before the audio reaches us from across Lake Lloyd. That’s right, the infield is so massive that Geico insurance was making hot laps in their offshore powerboat.

Bluegreen Vacations was the sponsor of this year’s Duel, and the format is a pair of 150-mile shootouts. The combined results of both races are used to determine the starting order of the Great American Race. However, since it is NASCAR’s biggest event, there are even qualifying laps for these qualifying races. Both races are double-file starts, where the inside and outside of the front row are determined by all-out lap speed.

Behind them, drivers and teams with enough points from last year are given automatic entries. The final four spots are for rookies or veterans who must “race their way” into the Daytona 500. The fan favorite of the night was 52 year-old Greg Biffle, who came out of a 5-year retirement with only a few sponsors. He easily schooled the younger drivers and locked in his car by finishing 14th in the Duel.

All cars hoping to win the NASCAR cup championship are new this year. This marks the 7th generation of the car’s evolution, that reaches back to showroom stock examples fielded in 1959. In order to keep up with innovations, everyone is now riding on 18” BBS wheels.

Other nice additions are a 5-speed sequential transmission, independent rear suspension, and a graphics package that better resembles a production car. Because of global supply chain issues, drivers were told to be careful in order to save as much steel as possible for the following races, but that didn’t stop the aggressive nature of the season’s big opener.

America’s most popular spectator sport is more relevant than it has been in decades, so here’s to Chevrolet for making Thursday night into one for the record books! 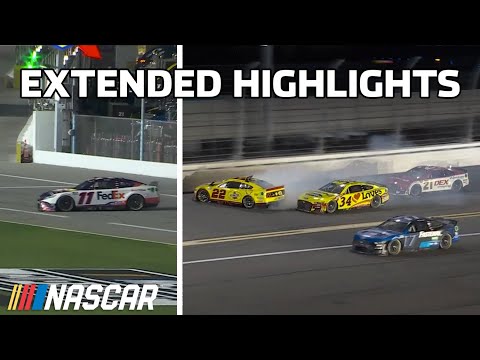