Home > News > Auto Guide
19 May 2009, 21:30 UTC ·
by Tudor Raiciu
You have seen this type of technology in war movies and documentaries. Airplane and helicopter pilots find their targets in total darkness and follow their every move until the inevitable happens. Car manufacturers, on the other hand, want to prevent the inevitable and some of them have adapted the military technologies so that drivers can pierce the pitch black night with their vehicles. To cut a long story short, it all boils down to the infrared camera, which needs infrared radiation to create an image, so instead of the 450-750 nanometer range of the regular photographic and video cameras, this one operates in wavelenghts that go up to 14,000 nanometers. The Beginning
The first car night vision system was implemented on the Cadillac 2000 DeVille, which used infrared technology to detect humans, animals and moving vehicles. These were then displayed on a HUD or head-up display. Two years later, Toyota's Lexus used the infrared technology to accomplish the same thing. The difference was that while the Cadillac used far infrared or FIR, the Lexus used near infra red or NIR. We shall detail both FIR and NIR later on, so don't fret if you're lost in technologies.

For some unknown reasons, the night vision was not as popular as initially hoped for, so it was dropped.

The night vision technology re-sparked enthusiasm around 2005 when eternal rivals Mercedes-Benz and BMW announced their very own systems. As expected, they didn't use the same technology as that would have been not according to their brand image. 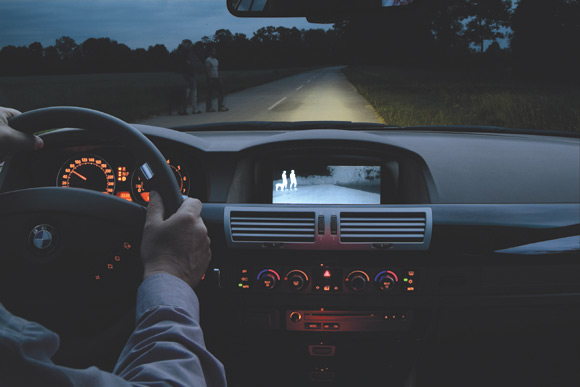 Introduced in 2005, the system is based on a 320x240 pixel thermal image sensor that detects very small temperature differences. BMW's night vision also uses a 36° wide-angle lens, touted as being three times wider than other systems, that creates an image of the surroundings based on heat. This means that warm objects such as animals or pedestrians appear as bright shapes, while non-living cold objects are considerably less visible.

The image showed on the console monitor is displayed in black and white just as a photographic negative. The system has a respectable working distance of 300 meters or 985 feet and doesn't require any active illumination. It's worth noting that the sensor is mounted on the car's front bumper just below and to one side of the number plate, while the image is transmitted to the dashboard monitor.

Other gimmicks of the Autoliv Night Vision System include automatic digital zoom of 1.5x at speeds exceeding 70 kilometers per hour and electronic panning function controlled by the angle of the steering wheel. Here's a quick video on how BMW's night vision system works 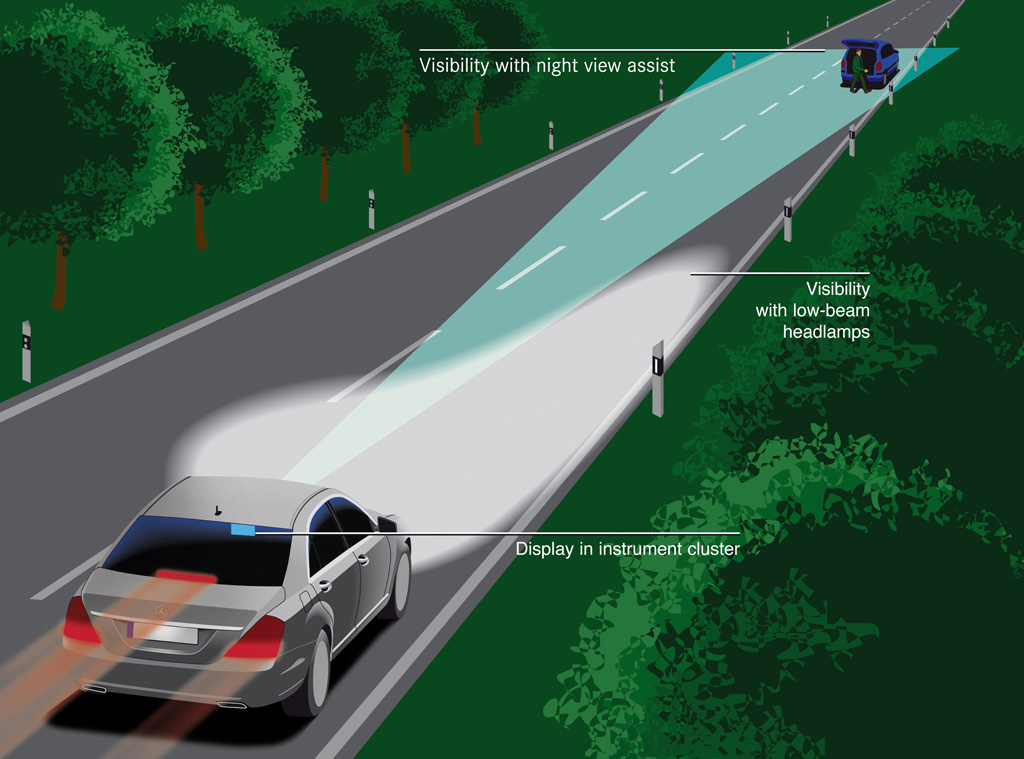 Unlike the passive Autoliv system, Mercedes Benz's NIR-based one uses a near-infrared source to illuminate with a wavelength of around 800nm within 150 meters or 492 feet in front of the car. The light travels until reaching an obstacle and the reflected illumination is recorded and showed on a special display behind the steering near the speedometer.

Given that the Night View system does not rely on body temperature, this system can also detect dead animals or non-living objects blocking the road. Advantages and Disadvantages
The pros and cons derive from the core technologies they are based upon. Probably the biggest advantage of the FIR-based Autoliv Night Vision System is the range. Thanks to the passive approach, BMW’s night vision system can work within a 300-meter range, while Mercedes Benz’s is limited to 150 meters. Another FIR advantage, albeit it’s a double-edged one, is that it only highlights pedestrians and animals, thus focusing the drive on what’s important. On the other hand, should an object or dead animal be blocking the road, Mercedes Benz’s NIR-based system would have the upper hand.

Moving on with FIR’s advantages, it should be noted that the system handles better fog, as opposed to the NIR, whose range is considerably affected by it.

Apart from decisive advantage in resolution provided by Mercedes Benz’s NIR-based system, another major pro is the cost, as the sensor lying at the heart of Night View Assist is considerably cheaper than that of the Autoliv Night Vision System.

The placement of the monitor is also in Mercedes Benz’s favor as drivers only have to look at the speedometer area to study the road head and not turn their heads away to the dashboard. The NIR disadvantage list includes sensitivity to glare from oncoming headlights or other NIR units and the object reflectivity dependence.