4 Colin McRae Memorabilia Auction to End Today
Up Next

How Much Would You Pay for the World's Most Expensive Bike? 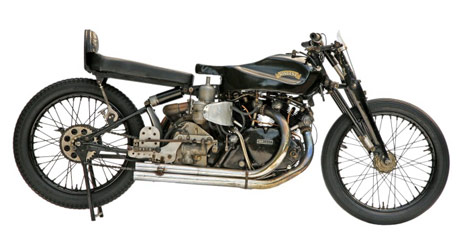 Before we go any further, let's first establish how the world's most expensive bike looks like, because we're willing to bet good money that it's not what you envisioned. If you're thinking it's an exclusive version of a mad speed demon made by some small sleepy Italian village high in the Alps or a high-tech machine developed by perfectionist Japanese, you'd be wrong.

The title of the world's most expensive motorcycle belongs to the British-made Vincent Black Lightning, a special edition variant made for one purpose only: to break the land speed record of the time, which would be in 1950. The fact that it never really got to do that is at the moment irrelevant.

What is important right now is that this supercharged model is going under the auction and will probably fetch somewhere in the region of $400,000 to $600,000. The exorbitant price also comes from the fact that this model is a one-off and the fact that it is still in perfect shape, with but a few miles on the clock.

The sale will be conducted at Bonhams' Classic Motorcycle Mechanics Show in Stafford, UK. The people there are right now hoping to break the current record for the world's most expensive bike. This is currently held by a 1915 Cyclone which sold for $520,000.

Did we mention that other than being old and yet in pristine shape it's also turbocharged? And the general consensus over here at autoevolution is that this is one awesome-looking machine. Any bidders yet? No? For more information, head over to Bonhams' site, where you'll find a huge collection of motorcycles and motorcycle related memorabilia.