5 Winter Survival 101: How To Properly Winterize Your Car for a Trouble-Free Commute
Up Next

With lots of electric vehicles on the roads today it's amazing to see people who think an EV is a death trap in case the car is stuck in traffic for a long time. This must be, as you cannot charge a dead battery on the side of the road, right? Well, it turns out an EV can hold its charge a long time while heating the cabin, as Dirty Tesla’s experiment proved.

How Long Can an Electric Vehicle Keep You Warm in a Freezing Traffic Jam?

The massive traffic jam on I-95 during the snowstorm in Virginia was the perfect opportunity for EV detractors to show how bad it is to be stuck in the cold with an electric car. The fearmongering went so far as to claim the whole traffic jam that followed the Interstate’s reopening was caused by the many electric cars with dead batteries that blocked the road. We’ve seen this happen in December in California, and USA Today already debunked the claim, so we don’t have to.

What is indeed true is ICE cars that run out of gas from idling too much in a frozen traffic jam can be easily refueled, while an EV cannot. Once the battery is depleted, they will need a platform to be removed from the place. On the other hand, an electric vehicle will need close to nothing at idle and only spend energy to heat the cabin. But how much energy is needed?

The guys at Dirty Tesla staged an experiment to show just how much energy is needed for an electric car to keep the cabin warm while standing still in the cold. Of course, the experiment was done using Tesla EVs, but it should be noted they used both a car with a heat pump (Model Y) and one that heats the cabin with a classic resistive heater (Model X). Both were charged at 90% and left out in the cold without being pre-warmed or preheated before the experiment began.

The weather conditions for Dirty Tesla’s experiment were even harsher than those in Virginia. The air temperature was 15 degrees Fahrenheit (-9.5 degrees Celsius) at the start of the experiment and dropped to 12F (-11C) after two hours. This is colder than the low 20s (below -5C) of Virginia at the time of the traffic jam. For good measure, the temperature inside the cars was set to 70F (21C).

After 12 hours of sitting in the cold with a warm cabin, The Model Y battery went from 91% down to 58%, using 26.5 kWh. This means a full battery will last around 36 hours. The Model X battery dropped from 90% to 47% and used 43 kWh, with the full battery expected to last 28 hours. It sure pays to have a heat pump when stuck in the cold. Remember, this is with the climate control system set to 70F, but many are content with less in the winter.

For the next 6 hours, Dirty Tesla did lower the inside temperature setting to 60F (16C). This caused the battery in the Model Y to drop from 58% to 48%, with 8 kWh used. This will push the car’s endurance to 60 hours. While Dirty Tesla did not reveal the results for the Model X, he offered some estimates in the case of ICE cars. According to his video, this hovers around 52 hours.

In the end, it sure looks like an electric vehicle is comparable with an ICE car in terms of how long it can keep its occupants warm. Except you can always crank up more hours in an EV by lowering the temperature, while in an ICE it doesn’t pretty much matter, since the heat is a by-product of the car’s engine function.

Now, after you see the full video below, it’s worth reading the comments too. These include reports from the actual people stuck in traffic on I-95 in an electric vehicle. They concur with the results of the experiment while also offering additional insight. We won’t need to venture far below, as the first comment is already telling. It details the story of a woman stuck for 16 hours in a Tesla of an unspecified model. Her car’s battery went from 74% to 61% as she turned on the Camp Mode and napped for a while. 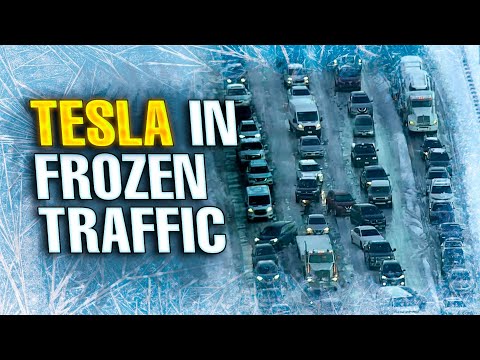