4 Elon Musk Deploys Starlink for Ukraine After Being Asked on Twitter, It's Impressive

Recently, Starlink got a roaming feature with the launch of the Starlink for RVs service. This also comes with a smaller, more portable hardware kit than the regular service. As the first kits arrived at customers, so did the first impressions on the internet. Here’s what to expect.

How Good Is the Starlink for RVs Service? First Impressions From People Who Got the Kit

As good as mobile internet has gotten in the past ten years, there are still no-coverage areas where it’s impossible to get a signal. SpaceX started the Starlink service with the promise to plug all the coverage gaps and offer a reliable internet connection where no other option is available. It proved very good at that too, and even the military has shown interest in the SpaceX internet service.

Since it was launched, the camper community saw the potential of having an internet connection in the most remote places on Earth. Unfortunately, the Starlink dish is rather bulky. To complicate things even further, when you sign up for the service, it will lock to your location, and it would not work in other places. For these reasons, the Starlink hardware kit is not suited for installation on an RV.

But there is a way when there is a will, and SpaceX addressed the new market with the Starlink for RV service. This adds a $25 roaming fee over the regular Starlink fee ($110) but promises to work in different locations. It does come with a smaller installation kit, which is much easier to take with you on the road. And despite the increased price, it comes with a few limitations compared to the regular Starlink service. Despite that, the Starlink for RVs might be great for a digital nomad, as shown in the video shared on Youtube by Steve Wallis.

He is already a Starlink customer, using the service at his rural home. As soon as the RV service was launched, he placed an order for the smaller kit to be able to have internet connectivity while on the road. He just received the package and was kind enough to share his first impressions of the new service. The good news is that the Starlink for RVs does an excellent job at providing internet connectivity, just like the fixed service does. But there are also caveats that Steve also talks about in his video.

As you can see, it’s easy to set up Starlink for RVs. You need to position the antenna and plug the router in, provided you have a power source. One of the downsides of the Starlink for RVs kit is that it does not work on 12 volts, so you need to have a generator or an inverter to power it. Once powered, the antenna will start to move around in search of the satellites. It took about 15 minutes until it got a lock then everything was good. Steve got about 50 Mbps on download, whereas the upload speed was slower, at 15-20 Mbps.

A software update landed shortly, improving the download speed to 100-200 Mbps, which is quite good. The hardware takes about 30 watts of power, so you should not run out of battery while using it. A regular 100-watt solar panel should have no problems keeping it powered for as long as it takes. The best thing about the Starlink for RVs (besides having it with you while camping) is that you can pause the service when you don’t need it. You can pay just for the months you use the service and save money for the rest. 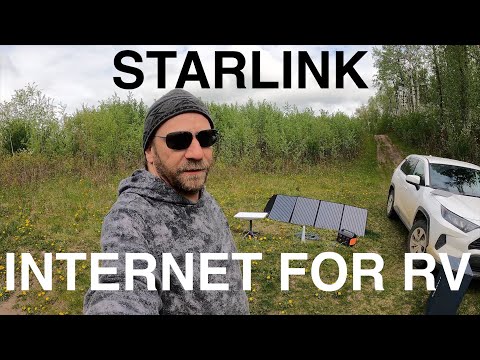