This Plane Traded a BMW Radial for a Daimler-Benz V12, Won the Hearts But Not the War

Backed by an Accelerated Delivery Schedule, GM's CEO Mary Barra has Elon in her crosshairs.

How GM Is Planning to Beat Tesla by 2025

In a Wednesday interview on CNBC's Squawk Box, Mrs. Barra viewed recent setbacks as par for the course. While everyone is enamored with the new 2023 Corvette Z06, development on other gas-powered models is on hold. That's because GM plans to introduce 30 new EVs by 2025.

The first part could be the hardest for many of us. Familiar faces like the Camaro, Colorado, and Malibu will be leaving us. In their place will be EVs underpinned by the Ultium arcitecture. This joint-venture with LG has produced batteries with 20% more energy density than anyone else. Ultium Cells, LLC is ramping up production in Lordstown, Ohio while also building a new plant in Spring Hill, Tennessee.

First up will be the GMC-Hummer EV, and it will be the centerpiece of the Neiman Marcus Christmas Catalog. Next, we will see the electric Silverado debut at the Consumer Electronics Show on January 6th. Starting with their full-size (most profitable) models is in stark contrast to the bungled launch of the Ford Mustang Mach-E.

In order to do so, factories have been building this chassis as fast as possible. This has led to a 50% reduction in build-time in anticipation of unprecedented demand. Back in September we reported that the 2023 Cadillac Lyriq Debut Edition had sold out within 19 minutes. For $59,995, it will arrive with 340 horsepower and RWD. Range is listed at "over 300 miles" but that's not what surprised us the most.

Deliveries start in Q2 of next year, and each example will be powered by a dozen individual battery modules. This modular design is not unlike Lego bricks, and it can be scaled in length and width to underpin vehicles of all sizes. It might be ironic that the Corvette's empty tunnel between the seats is the same size as four of these modules. Don't believe us? The fuse for the hybrid system was already leaked in the owner's manual.

Modular batteries are just one half of the chassis equation. The 400-volt architecture will utilize three flavors of electric motor. The largest is 315 hp, and it is is slated for RWD. Next up is a 240 horsepower unit that can be mounted at any corner. Finally, an 83-horsepower helper can be mounted anywhere as well. This modular motor approach is how the upcomming Equinox will offer a price of $30,000.

In order to prove the versatility of the Ultium platform, GM created BrightDrop to handle commercial fleets. The EV600 is a full-size delivery truck that went from idea to production in less than 20 months. FedEx is already receiving their order of 500, which has prompted Verizon to get onboard. Deliveries of the smaller EV410 are slated for early next year, with the same smaller architecture being used to build a Chevy Equinox EV. With a target price of $30,000, it will give families a nice alternative to gas.

Their new lineup is only half of the equation. Earlier this week, GM President Mark Reuss announced a new plan to add 40,000 Level-2 chargers across the U.S. and Canada. While other brands use a top-down view to place their charge points, GM dealers will highlight the best areas and participate in the install.

If they can flood the market with long-range EVs, this plan could possibly level the playing field. Most media outlets poke fun at GM because it has been easy up until now. We'll give them the benefit of the doubt, especially because gas prices show no signs of retreat. Stay with us as these plans evolve. 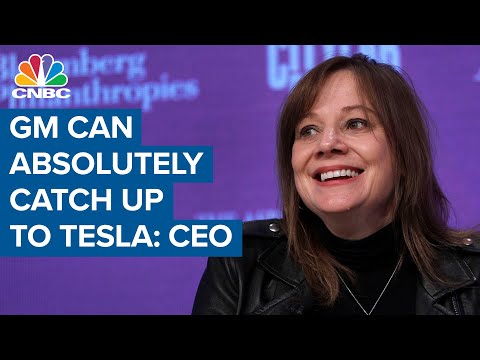