1 How Does the HANS Device Work?
Car video reviews:
Coverstory 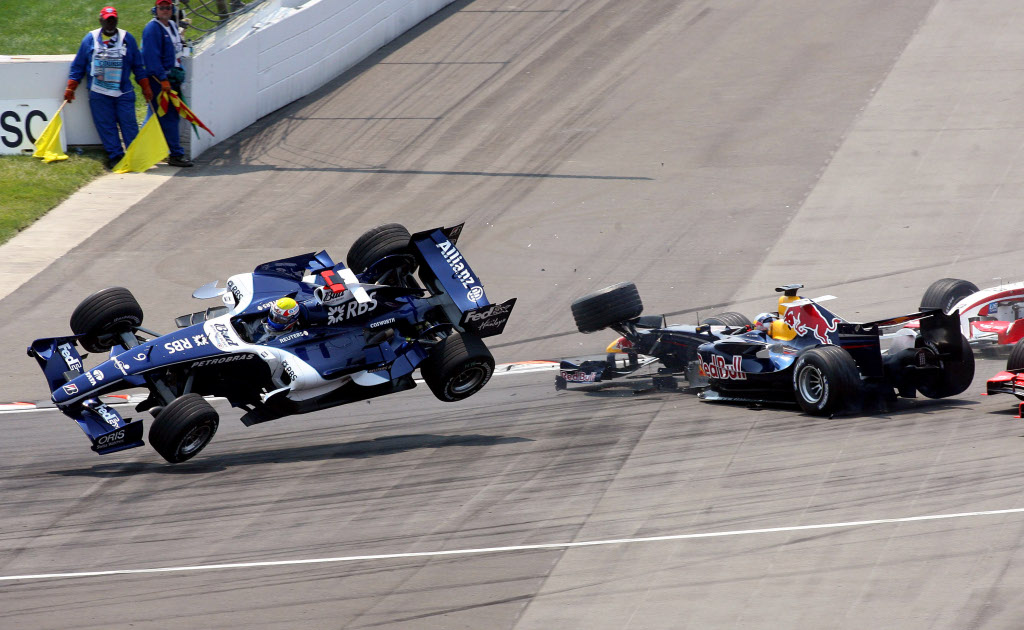 Driving Formula One cars must be the dream of every living racing fan out there. We're not going to get into a dispute over which is best, Formula One or NASCAR, as the prototype of a racing fan is not based on nationalities, but on that desire to get behind the wheel and race like crazy. The Great Circle has been righteously named The Pinnacle of Motorsports as it benefits from the latest developments in terms of engine, aerodynamics, electronic systems and safety.

Which is what brings us to out theme today. Sure racing is fun and blood pumping and surrounded by all the glitter of the high-life world! But it's also very dangerous, as recent incidents (Felipe Massa, Henry Surtees) have shown that no matter how much F1 safety evolves, there will always be something human nature cannot control in this brave sport.

As far as drivers' safety is concerned, Formula One is the clear evidence that only something truly unexpected can trigger a life-or-death situation after a severe accident. Ever since Ayrton Senna's death in 1994, FIA president Max Mosley pushed continuously for improving the safety of the Formula One drivers (this might be the only thing that actually worked for him during his many mandates, we might argue) and the results are quite conclusive. Except for Felipe Massa during the 2009 Hungarian Grand Prix, there was seldom the case a driver would miss a considerable amount of races because of an accident sustained during an F1 race. In addition, not one death was ever recorded since Senna's crash at Imola.

Prior to each season, the International Automobile Federation (FIA) must issue an approval for each car designed to take part in the following year. Therefore, each car will have to undergo a crash test in order for the international federation to evaluate how it will react in severe impact conditions. 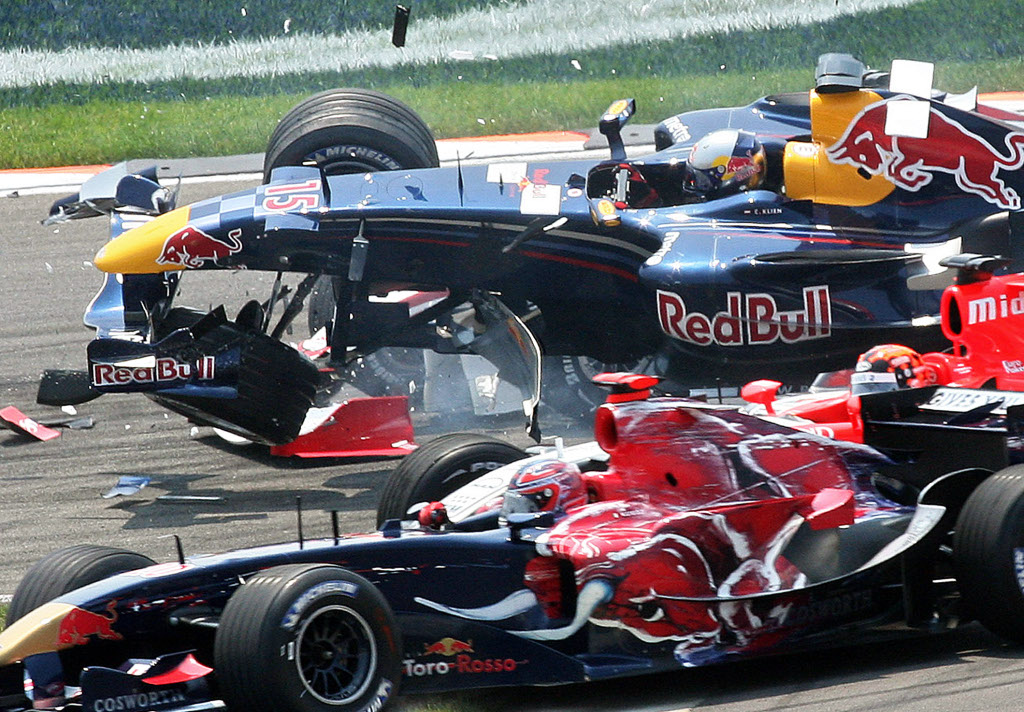 First of all, don't think that the speeds at which the front, side and rear impact crash test occurs are much higher than in your usual road car safety test. According to the latest information provided by the FIA, the front impact speed is 54 km/h (33 mph), the lateral 36 km/h (22 mph) and the rear 40 km/h (25 mph).

The basic idea is that all the data gathered by the FIA technicians at these low speeds – considering the actual potential of a Formula One car – should be accurate. Based on that information, they will be able to determine the way an F1 machinery will react during a heavier impact (meaning how it will absorb it).

Also, the cars are being tested under different amount of loads – lateral, longitudinal and vertical – for the FIA to figure out how the car’s rollover structure will react to impact. A car which will pass the crash test is a car whose structure will only undergo slight deformations, within the FIA rules.

A crash dummy will be inserted in the cockpit in order to evaluate the maximum level of deceleration under braking and energy absorption a driver must sustain during a race or impact, respectively. The FIA requires that a maximum force of 60G should be applied on the chest of the dummy within three milliseconds of impact.

Before each race, a FIA steward will go to each team and check their cars for safety infringements, as well as verify their compliance to the ongoing technical rules of the international federation.

For a more detailed look at how these F1 crash tests work, click here. 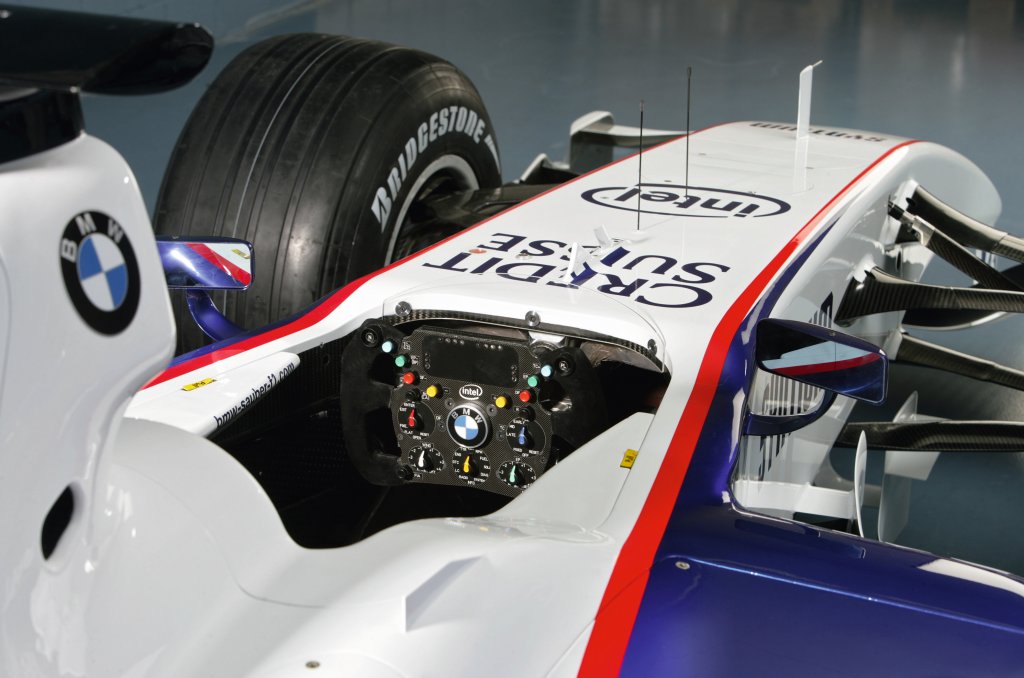 In terms of cockpit safety, the most important “chamber” is the driver's survival cell. It is surrounded by a structure that protects it in case of a crash, meaning it absorbs all the forces at impact and “features a roll-over hoop behind the driver’s head, made of metal or composite materials,” as stated by a Formula One report on their official site.

“The survival cell’s flanks are protected by a 6mm layer of carbon and Zylon, a material used to make bullet-proof vests, to prevent objects such as carbon fibre splinters entering the cockpit,” added the explanation from the Formula One's site.

The cockpit must be built in such a way that it permits the driver to get out of it in a maximum of 5 seconds. In order for that to happen, the widths of the cockpit – at the pedals, at the steering wheel and in the rear - have been increased. In addition, the FIA strictly stipulates that fuel, oil or water lines will not be allowed to pass through the cockpit in order to further help the driver get out of the car in due time.

As the same time – still to help the driver walk away from the cockpit as quickly as possible – the 6-point harness seat belts have been designed in such a way that they may be removed with only one move.

Also, each car must feature a fire extinguisher system in case a fire will pop out either as a result of a crash, or something going wrong with the car's electric system. The system must be triggered immediately by the driver, who will also make use of a button to switch off the car’s electronics, fuel pumps and rear light.

Post-crash analysis is also very important in terms of F1 safety as it tells the doctors how severe the impact was. Consequently, an accident data recorder is mated to each F1 machinery in order to provide the paramedics and the team with the necessary information about the accident.

Although manufactured from lightweight materials, both the cockpit and the surviving cell are tested in order to absorb some huge amount of forces. In addition, the edge of the cockpit – designed to protect the head of the driver in case another car flies over its top and lands on it – is also made of force-absorbing materials and must have a minimum thickness of 10 cm.

In terms of driver's equipment, the three devices worth mentioning are the helmets, clothing and HANS. 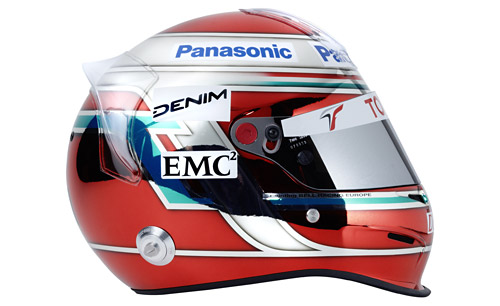 As far as helmets go, they are made out of carbon fibre, polyethylene and fire-resistant aramide and designed to both absorb impact and provide the drivers with improved visibility. Also, a helmet must be very light (no more than 1.250 kg) in order not to make the driver subject to extreme forces when decelerating, accelerating or cornering.

The lighter the helmet, the smaller the forces applied to the driver's neck. Also, the visor must be manufactured in such a way that it provides maximum visibility, protection at impact and resistance to flames. Felipe Massa's accident during the Hungarian GP is a sole proof of how resistant those visors are, as his was hit by a piece of Rubens Barrichello's car at over 110 mph.

In addition to ensuring the safety of the drivers, the helmets are also designed in such a way that they minimize the risks of drag during the race.

As far as the HANS device is concerned, it's designed to offer an extra protection to the neck under the high G forces applied on the driver's upper part during acceleration, deceleration and cornering. For a more detailed look on how they work, visit our How HANS Work guide.

The driver's suit is manufacturer of Nomex, a special fire-resistant, lightweight artificial fibre that undergoes laboratory tests (thermal) prior to being used. The suits are made of 3 different layers of Nomex, and allows the driver to survive temperatures of around 840 degrees Celsius for a maximum of 11 seconds.

Also, as we all know, a driver will lose around 4 kilograms during a single race due to the high temperatures inside the Formula One cockpit. In order for a driver not to walk out of his cockpit with 4 kilograms of water inside his pants, the suits must be breathable, meaning it must allow sweat to dissipate into the air. 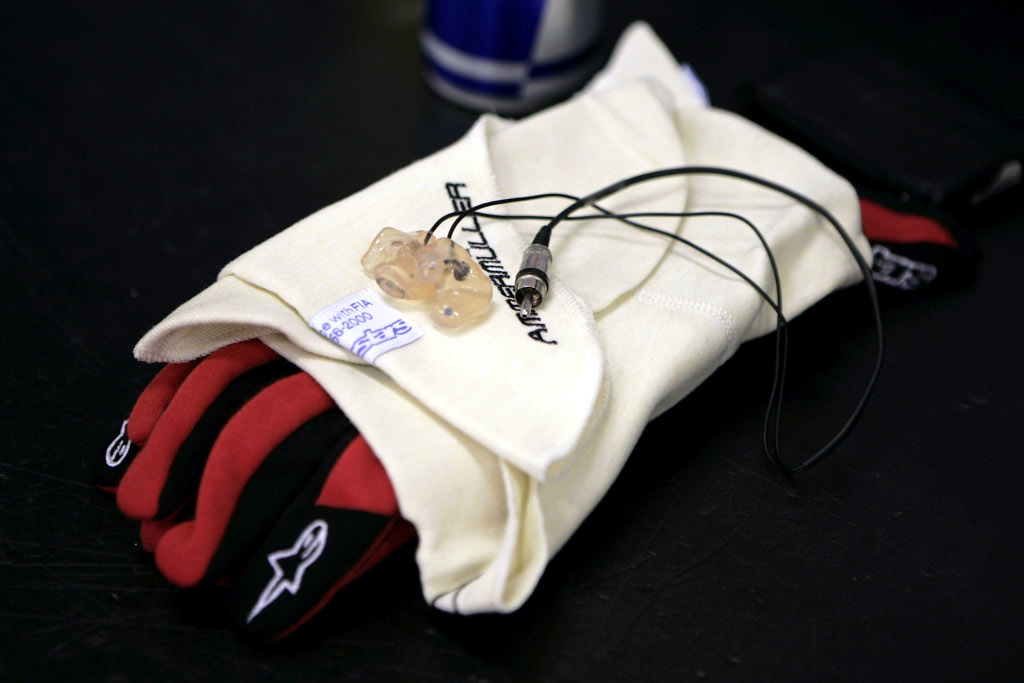 The driver's gloves are also made of Nomex, but are specially designed to provide the driver with the perfect amount of grip on the steering wheel.

Now that we've got the cockpit safety out of the way, let's focus on trackside safety for a few minutes. Part of the accidents that occur or have occurred in Formula One have been related to mechanical or electrical problems, but most of them were triggered by track incidents. In order for a race to be accident free, one would need each of the 20 drivers on track to drive a perfect race fom beginning to end, while also pushing to the limit. And that's close in impossible!

In order to minimize the resulting accidents triggered by driving mistakes, the FIA worked hard enough to ensure that the circuits currently part of F1 should have run-off areas wide enough, tire barriers shock-absorbing enough and race marshals quick-responding enough to prevent a tragedy.

Run-offs are carefully placed by the circuit officials in several areas of the track in order to prevent a driver from crashing into a wall or tire barrier. Although the majority of those run-off areas initially consisted of gravel traps – in order to slow down the cars until they've reached the barriers – some of them were replaced by asphalt areas in recent years. The explanation is that drivers have a better chance of braking more effectively on asphalt rather than keep control of their car on gravel. 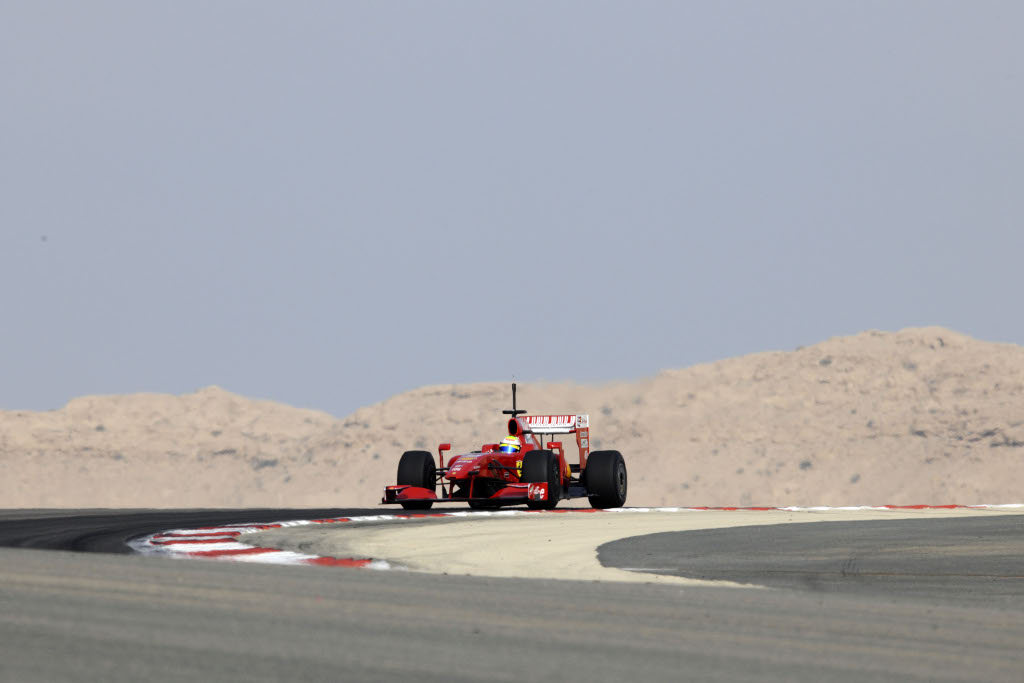 At particular fast tracks, the FIA recently developed a high speed barrier able to absorb the energy of a collision at 200 km/h (124 mph).

In addition, in case of an accident resulting in a major fire, the FIA states that every circuit needs to have installed a considerable amount of fire extinguishers around the whole track (at least one every 300 meters).

The last but not least of the safety features Formula One benefits from race after race is the medical provision. Each circuit has a private clinic, ready at all time to assist and intervene in case the situation requires them to. There are no less than 8 people working in 3 shifts to provide medical assistance around the circuit – orthopaedic surgeon, an anaesthetist and six paramedics for each of those shifts – as they are handed some of the most up-to-date medical devices for a potential medical intervention.

Also, the FIA's chief medical delegate, Doctor Gary Hartstein, is always placed in a safety car near the exit of the pit lane, ready to step in as quickly as possible in the event of an accident. The entire medical system at each circuit is comprised of one salvage car, two rescue cars, another 2 extrication teams, two ambulances and 2 helicopters.

When Hartstein will arrive at the place of the crash or accident, the accident data recording system installed in each cockpit – as mentioned before – gives him a first update on the severity of the impact.

In addition, a number of approximately 15 hospitals are placed under alert throughout the duration of a single grand prix.

Still think Formula One race is only about getting behind the wheel of a car and drive it to the limit for about 50 or 60 laps? According to another piece of information provided by the Formula One site, almost all circuits hold extensive training programmes for their staff – approximately 700 people – prior to their annual Formula One event. All this to insure the safety of 20 people driving fast cars and some 50,000 others watching them.