3 This Four-Wheeled Robot Laughs in the Face of Gravity, Climbs Walls

How About a 3D Printer That Moves and Is Completely Autonomous?

Vlad Mitrache
We were laughing when our grandparents told us about how they couldn’t get their heads around this new invention at that time called television, but now we’re starting to feel just like them.
1 photo
It’s not that we can’t accept the things going on around us - nothing that extraordinary has happened so far - it’s just that there’s so many of them. There are spectacular advances in medicine and genetics, we’re close to having perfectly functional bionic prosthetic limbs, the cars don’t need us to drive around and going to space will soon become a leisure activity (for the very rich, granted).

Some of these fields we’ve mentioned and their inventions benefit a lot from 3D printing. Being able to create in a relatively short time the object you’ve just 3D modeled on your computer is extremely convenient. But as great as they are, 3D printers have one major inconvenient: the size of the object they can create is limited to their own dimensions.

The robot is the work of Robert Flitsch, a graduate of the Harvard John A. Paulson School of Engineering and Applied Sciences who got the idea while thinking about a better way to repair the surface of an ice rink after it has been chipped by skates. Things took off from there, and he’s now working on a prototype Addibot (that’s the name he uses to describe the additive manufacturing robots) that will be able to even the road surface by filling up potholes and other cracks.

But having a printhead with a virtually unlimited movement area opens up a lot of other possibilities. In fact, Robert Flitsch says it himself, quoted by Robohub.org: “Once you get rid of that confined workspace and you make the world your workspace, there is no telling what you can do.”

Below you can watch a 2D image printing Addibot, just so you get an idea of how things are working. This is basically a printer where it’s not the paper that’s moving, but the printer itself. The technology isn’t yet 100 percent finalized, but Flitsch hopes to have a commercial-ready Addibot anywhere between one to three years. I don't want to sound shallow, but hiring a designer and a better photographer wouldn’t be a bad idea at all. 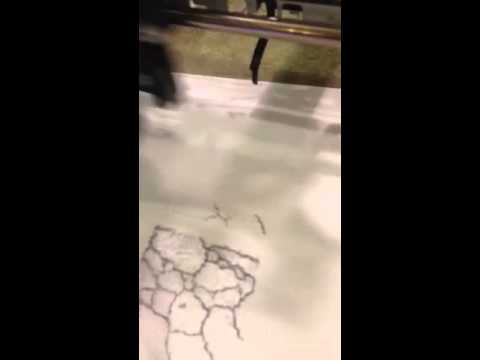