Home > News > Videogames
16 Jun 2022, 18:51 UTC ·
by Cosmin Vasile
Hot Wheels Unleashed developer Milestone has just released the next piece of content for the arcade racer. If you’re an avid fan of the Hot Wheels Unleased franchise and the game at the same time, there’s a lot of new stuff coming your way each month. That’s the good news. The bad news is that nothing comes for free, so you’ll have to pay for each new Hot Wheels Unleashed DLC the folks at Milestone release on a regular basis.
10 photos

The new Jurassic World Racing Season is now available for all Hot Wheels Unleashed players for just $6 / €6. It’s not really a high price to pay, but it will be up to each and everyone to decide whether or not it’s worth the money.

What we do know is that the new expansion adds a large number of free and premium unlockable content playable by completing a wide range of new challenges added specifically for the Season. On top of that, players who buy the expansion will receive six themed vehicles: Tyrannosaurus Rex, Velociraptor Blue, Stegosaurus, Mosasaurus, Triceratops, and Tyrannosaurus Rex Monster Truck.

Keep in mind that you’ll only get five vehicles as soon as you buy the expansion, but a sixth (Stegosaurus) will be added to your garage as an instant reward once you unlock all the premium items of the season. It’s also worth mentioning that this DLC is not included in the Hot Wheels Pass.

Also, the Jurassic World Racing Season features themed customization items for the Basement and the Player Profile, along with a bucketload of gears and coins. In total, the expansion brings 12 elements for your Basement (3 walls, 2 floors, 2 doors, 2 decorations, 2 posters, 1 set of 4 posters) and 3 elements of your Player Profile (1 icon, 1 tag, and 1 background).

The Jurassic World Racing Season will run from June 16 until August 30, but it will only be available for purchase until August 25. 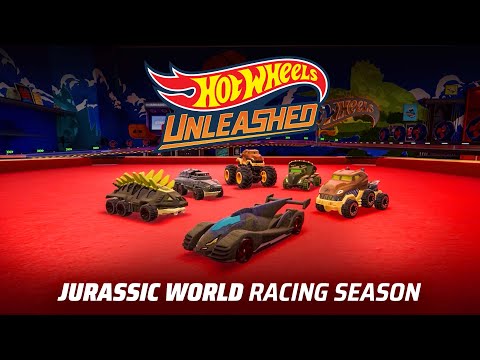