5 Cyan Racing 1964 Volvo P1800 Restomod Looks Like a Hoot to Drive
Car video reviews:
Up Next

"Hot Wheels" Turns Cold Aiming for Nines on the Quarter-Mile, Breaks Diff off the Line

Home > News > Auto Motorsport
31 Jul 2022, 13:26 UTC ·
by Razvan Calin
Drag racing is thrilling for many reasons: the excitement of high-speed runs down the flat strip of tarmac, the lung-tearing roar of the engines, the outrageous mechanics, and the list could go on. However, competing is a slightly different story. One such racer of a very prestigious car shed a little light on the matter.
12 photos

Lee Johnstone is an Englishman who got his drag racing machine immortalized by HotWheels. The guys from Car Throttle YouTube channel got a ride with the iconic car, which turned out to be quite a surprise in more ways than expected. Sure, the five-decades-ago modified Volvo P1800 Gasser is an astounding beast. Its massive American V8 engine, oversized rear tires, and diecast legacy put a legend aura over it. But it is just a mechanical assembly, as all race cars are, despite the intricacies of their engineering.

The Gasser's owner (and driver) has built his racer from the ground up. And that's as literal as it gets, as he started with a $975 carcass of a 1969 Volvo P1800 (the gallery shows the less-than-humble origins of the straight line sprinter). Coveted for in its time, primarily due to the stamp put on it by "The Saint" TV series of the '70s, one P1800 model also happens to be an all-time best dependable car. The record of the highest mileage achieved by a single-owner private non-commercial vehicle: 3.25 million miles (5.2 million kilometers), duly attested by The Guinness World Book of Records.

The Gasser, on the other hand, is an entirely different machine. With its modified Chevrolet 454 ci V8 (7.4 liters) paired with a 671 GMC turbo and two four-barrel carburetors (coincidentally branded Demon), the car deals with the quarter mile in a hair over 10 seconds. 650 HP swiftly takes the 3,000 lb (1,350 kg) vehicle at near 133 mph (214 kph) across the line. It sure lives up to its Ain't No Saint name (subtle hint to the popular TV series mentioned beforehand, where the main character would go by the name of "The Saint").

Well, mere mortal or disgraced angel as it might be, the car is very quick off the line. The reaction of the lucky passenger riding in it tells a lot about the track-shredding sheer force the car develops. And it's not just the asphalt that gets punished by the brutality of the engine. The rear differential was blown away in a split second, and the car lost its first race of the day without even putting up a fight. Then again, these types of racers are called "projects" for several reasons, and one is the continuous labor required to keep them at "Hot Wheels" rank. 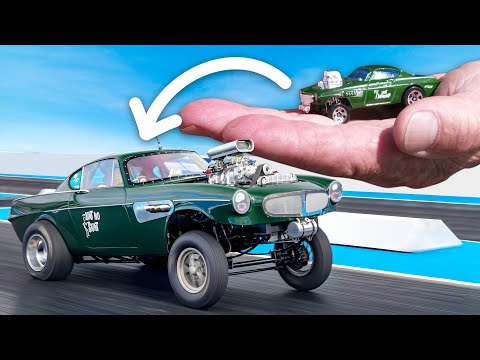