5 55 Years of Hot Wheels Corvettes: Part 1 of the Fifth Era
Up Next

Dragos Chitulescu
When a habit begins to cost money, it's called a hobby. If you're going to be serious about collecting Hot Wheels cars, you'll end up spending thousands if not tens of thousands of dollars to get to a decent level. We kicked off Celebration Month with a story of the Super Treasure Hunt models that Mattel released in 2020, and we looked at cases A through E, to begin with. And now we're going to continue with the remaining 10 items on that list.
30 photos

Back in 2012 Hot Wheels introduced Jun Imai's replica of the IMSA-style SA22C Mazda RX-7. A rather plain-looking Treasure Hunt version came along in 2013, but it wasn't until 2020 that it graduated to the STH level. The base car was part of the Speed Blur series and featured an Orange paint job with white Aerodisc wheels.

The Super Treasure Hunt was painted in Spectraflame Orange and had Black and White Real Riders Aero rims. We might be biased here, but we quite liked this item whereas Lamley voters considered it to be one of the least interesting models of 2020. That means prices on the market won't be that prohibitive, and you should avoid listings that are over $100.

Moving on to Case G we are once again greeted by a Japanese-built machine: the 2017 Nissan GT-R R35. It's somewhat unexpected to see two GT-Rs being featured as the Super Treasure Hunt model during the same year, but then again Hot Wheels collectors are big fans of any "Godzilla" generation.

With that in mind, the Lamley vote ended with this casting taking third place overall. As always, you might want to stay away from the Short Card versions as they can cost as much as $260 on eBay. If you're just keen on having a Spectraflame Blue R35 on display, a loose one will be just as good.

The 1984 Audi Sport Quattro casting has been around since 2019 and it already enjoyed quite a fair share of success among collectors. The 2019 Dark Green variation with Aerodisc wheels wasn't exactly a premium but still featured some nice details. Still, there's nothing like a Spectraflame paint job to take things to the next level.

The 2020 Quattro didn't have any decals on it to affect the clean look, and the white Real Riders Exotic wheels made it look like something coming straight out of the SEMA Show. We don't know about you, but $30 sounds like a fair price to pay for a car this cool.

Without a doubt, the Lamborghini Sesto Elemento is one of the rarest cars to be portrayed in the 2020 Super Treasure Hunt series. We've been fortunate enough to see one of these at the Lamborghini Museum, and it's almost a certainty that you'll only ever be able to buy a diecast version of it.

Hot Wheels has been using this casting since 2014, but on most occasions, it has been sitting on horrible TRAP5 wheels. The Spectraflame Light Blue special item of 2020 is still the best Sesto Elemento to be produced by Mattel, so don't be shocked by the fact that a Short Card model could require a hefty $400 investment.

On to Case K and we're back to the USA with the classic 1957 Chevy in Spectraflame Pink. Larry Wood designed this casting back in the '70s and there are so many variations of it out there that it would take a whole separate story just to mention them all. The Real Riders Steelie wheels are just right for the job.

Looking at the decals on the side, you'll notice a reference to El Segundo, California, where Mattel's headquarters are located. If you'll pay attention to the market you'll see that some people have listed multiple STH models for sale. So if you're going to buy more items from the same person, be sure to ask for a discount before wiring the money.

Case L provided another Chevy STH: a custom 1969 pick-up truck in Spectraflame Olive Green. Somehow this was just as boring as the Honda CR-X, and it's no wonder that Hot Wheels has only produced four variations of it in the past three years. Even the rare Short Card model won't cost more than $130, but with any luck, you could convince someone to sell you a loose truck for less than $20.

The 1965 Ford Galaxie was next in line to become a Super Treasure Hunt legend and the Spectraflame Black paint job was complemented with Green accents thanks to the flames and windshield. The most expensive one we could find is located in Australia and has an asking price of $164. Once you get that, you'll just need a dozen more different variations to have a complete collection of this casting.

Case N for 2020 brought forth the 2018 Dodge Challenger SRT Demon STH, and we'll have to check when was the last time that Hot Wheels used the same casting as an STH for two years in a row. This thing went from Spectraflame Red to Yellow and even upgraded the wheels in the process. Finding a carded version of this for less than $50 might be a tricky thing to do though.

The 2017 Pagani Huayra Roadster is the second 2020 STH to feature an open roof, and the Spectraflame Green paint perfectly matches its exotic character. We haven't seen a premium Huayra Roadster yet, but we know a Zamac version is coming up in 2023. In the meantime, we were shocked to see this one seller from South Carolina asking $800 for a Long Card model.

And we've made it to the last STH item to appear in the 2020 mainline series. The '64 Chevy Chevelle SS was featured in Case Q that year, and you can't help but get all worked up at the sight of an exposed engine. Brendon Vetuskey designed this casting for its initial appearance in 2012, and for some reason, Hot Wheels has not used it in 2022. Just like we've seen with other STH items, prices vary between $20 to $110. We'll be back with a review of more Super Treasure Hunt collections soon! 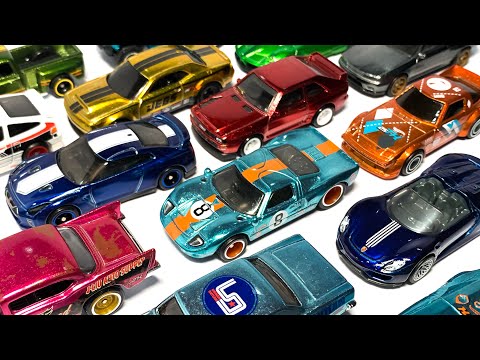