2 Hot Wheels Exclusive RLC Chevy 454 SS Coming Right Up, You Can Get Two

5 2022 Hot Wheels Legends Tour Is in Full Swing, Big Winner Yet to Be Chosen
Car video reviews:
Up Next

Have you ever experienced FOMO? Any cryptocurrency enthusiast will tell you how big an effect the fear of missing out can have on a person. Of course, FOMO isn't a crypto-exclusive feeling, as anyone can and will experience it at some point. And it looks like it has been slowly creeping into the Hot Wheels community as well, judging by the latest events.

Less than two weeks ago, Hot Wheels Red Line Club members had the option of purchasing the latest NISMO R34 GT-R. On the 21st of June, at exactly 9 AM PT, we imagine that thousands or perhaps tens of thousands of people accessed the Hot Wheels Collectors website. Why would we imagine that?

Well, because the stock of 30,000 units was depleted in less than 10 minutes. Sure, you can blame scalpers for using bots to get as many pieces as possible for gaining a profit. Also, some people used multiple accounts or asked family members to step in to get more than one car.

But the bottom line is that 30,000 Skylines vanished in less than 600 seconds. You do the math. Those that managed to get their order in went on to express their happiness on Social Media, while the other group expressed its dissatisfaction with the way Mattel handled the issue at hand.

So what do you do when your fan base is unhappy with the fact that you have created an insufficient amount of a certain product? A few days after the whole R34 episode, Hot Wheels announced that a new RLC exclusive item would become available: the Chevy 454 SS.

This time, each RLC member would be given the chance to purchase up to two vehicles per account. To give more people a chance at buying this product, Mattel even removed the numbering on the package. This leads to the idea that the plan was to build more than 30,000 collectible items, as was the case with the Skyline.

At this point, opinions among collectors were divided. Some were happy to receive the news, others were less so. Most of the unhappy customers wrote something along the lines of "Why would I even buy the new RLC Chevy if it's not a limited-edition series?"

This just goes to show that in life, it doesn't matter what you choose to do. Some people will appreciate you for your decisions, others will think differently. And this brings us to the main point of this story.

After just buying the R34 Skyline, we were unsure of whether we'd want to add the Chevy 454 SS to the collection too. Still, we accessed the Hot Wheels shop at precisely 9 AM PT. It must have suffered an overload of some sorts, as it was listed "Sold Out" just seconds after it became available.

It all seemed to be just a glitch, something that many collectors have also noticed. After refreshing the page a couple of times, it was once again available. But this time it appeared as a Pre-order to be delivered on or before the 28th of October. We quickly added two units to the shopping basket and proceeded to the check-out.

Some 30 seconds later, the transaction could not be completed as the car was once again "Sold Out". As much as we tried refreshing the page, the conclusion was obvious and supported by customers around the world. The whole stock of the RLC Exclusive Chevy 454 SS sold out even faster than was the case with the R34 Skyline.

Meanwhile, eBay is overflowing with dozens and dozens of listings put up by people that are trying to make a profit off of it. The most outrageous one has an asking price of $500. We've seen hundreds of genuine collectors complaining about the whole thing, and we can only hope that Mattel comes up with a solution to prioritize the needs of the community and deal with the scalper plague. Meanwhile, we still have this unboxing video from Lamley Group to look at. 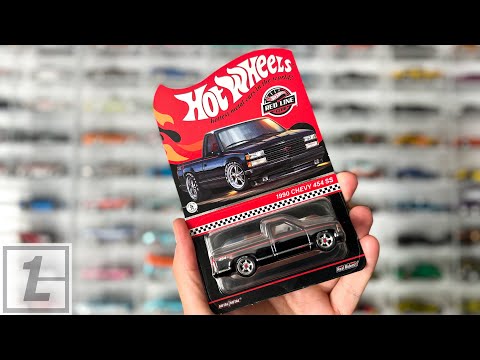