1 Hot Wheels RLC Exclusive Chevy 454 SS Was an Instant Hit, All Sold Out in 10 Minutes

3 Hot Wheels Exclusive RLC Chevy 454 SS Coming Right Up, You Can Get Two

5 Hot Wheels Legends Tour Is Going Back to the UK After a Volvo P1800 Gasser Won in 2021
Car video reviews:
Coverstory

If you grew up watching Steven Spielberg's Jurassic Park, you're going to love this new Hot Wheels set. Also, there's a good chance that you didn't enjoy the most recent Jurassic World film, but we aren't going to talk about that here. Over the past few years, we've seen quite a few diecast cars inspired by the world of man-made dinosaurs, both from Hot Wheels and Matchbox. But this new one is still very much welcomed.

First off, hats off to the people at Hot Wheels for designing the simple yet beautiful graphics on the cards for this series. If you were tempted to open these up before, you might want to think about it twice now. Or at least you can consider watching some tips and tricks on how to proceed without damaging the card.

Second of all, did you notice the Premium tag just under the Hot Wheels logo? A glance at the bottom of the card will reveal the fact that we are dealing with metal-body models with Real Riders wheels.

Even though more than half of the cars in the set are fantasy vehicles, the fact that they are premium castings changes everything. Each car has a dinosaur-inspired livery on it, and your inner paleontologist might help you identify all of them.

Starting with the Bread Box, this one has a representation of the Velociraptor that goes by the name of Blue. Thank God for the trailers; otherwise, we wouldn't have recognized this particular name. Back in the '90s, nobody would have associated a Bread van with a fierce Raptor.

This casting has been around since 2010 and has been often used in Pop Culture series. The panoramic roof adds a nice touch to the design, although it wouldn't exactly be ideal in a third-degree encounter with a dinosaur.

The Mercedes-Benz Unimog U 1300 L is up next, and you don't have to be an expert to recognize the mighty T-Rex. This particular casting was introduced in 2018 and used exclusively for the Pop Culture and Car Culture series. Arguably, it's also one of the best cars in this set.

The 1938 Dodge Airflow is the third car in here, and you'd almost think this is a brand new casting. But you'd be mistaken because it first made an appearance in 2012. But it is sort of rare, as there have been only four previous iterations of it.

It also happens to be the only car to feature a fictional dinosaur: the Indominus Rex. It's a strange combo indeed, as this looks more like something out of an Al Capone movie instead. As if one van wasn't enough, we give you the Combat Medic. Not that we're complaining!

This seems to be a rather good match to the Dilophosaurus, but even so, your chances of survival would be slim to none. This is without doubt one of the longest-running Hot Wheels castings ever. First introduced in 1986, the Combat Medic traces its origins back to the 1977 Letter Getter.

How's that for a quick history lesson? The last item in the series is the HW Tour Bus, featuring the Mosasaurus on the side. This, too, is a contender for the title of the coolest car in the set. In real life, the tour bus is just as long as we presume the aquatic dinosaur was, so about 45 feet.

Although some stores will charge up to $60 for this Pop Culture series, we've managed to track down this set on eBay for as low as $33.99! But you can always wait to find it in a store near you if you enjoy a bit of "hunting in the wild." 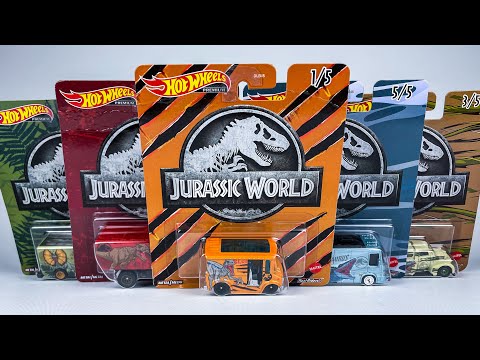