1 Mattel Reveals 10 More Reasons Why You Should Start a Hot Wheels Collection, Choose One

2 Inside the 2023 Hot Wheels Case B, Mercedes-Benz 300 SL Super Treasure Hunt Is Here

3 2022 Was a Good Year for Hot Wheels Collectors, Here Are All the 15 Super Treasure Hunts

Before you start a Hot Wheels collection, ask yourself this question: do you want quality or quantity? If you're not planning on racking up thousands of diecast cars, you might as well opt to buy premium models only. These look much nicer than their mainline counterparts and their value will go up in time. But you should be able to decide on a monthly budget and stick within those limits.

That's because there are plenty of premium models out there to hunt for. And if you get carried away, you might end up spending thousands of dollars each month just to get them all. But we dare not think how much it would cost to carry out your completionist dream.

It may well be in the tens of thousands of dollars, and at that point, another question arises. Are you better of buying a real-life sportscar instead? Hot Wheels are nice to own, just like video games are to play. But nothing beats the real world!

With that out of the way, there's a new premium set you might want to look for in stores. The Premium Collector Sets consists of four vehicles that have diorama-style packaging to go with them.

Hot Wheels introduced this format in 2020, with a set that was focused on Nissan vehicles. The Fast & Furious collection was up next and it seems that each year the company releases four sets in total. Each one contains three vehicles and a fantasy hauler.

The most recent one was the BMW M Series set that contained the 2016 BMW M2, the 2001 BMW M5 E39, the BMW M3 E46, and the Fleer Flyer. But now we are headed straight for Japan with a collection that pays tribute to the golden era of JDM cars, the '90s!

We've already known for a while that Mattel will be unveiling the new 1991 Nissan Sentra SE-R casting, and we're happy to see it up close at last. The Metalflake Navy Blue paint job hasn't been covered in decals which most collectors will be happy to see.

The Mini Real Rider 5-Spoke Modern wheels are quite rare, as Hot Wheels only started using them earlier this year. This vehicle is without doubt the highlight of this set, but the other two aren't half bad either.

The Honda Civic EG is now at its fifth iteration if you don't consider the drag racing version used in Mainline. There has only been one non-premium version of this casting so far, with the introduction of the Honda Civic series. Yellow might just be the best color for it so far, even though we have seen this paint job before.

The 1995 Toyota Celica GT-Four is the second-rarest car included in this set. It first showed up earlier this year as part of the Car Culture: Mountain Drifters set, when it sported a Super Bright Yellow finish.

This Super Red version looks just as stunning, especially with the Golden 10-spoke rims on. The Fleet Street hauler adds a nice touch to the set and can make for some interesting shots if you're keen on improving your diecast photography skills. This is its third appearance so far, but you can never have too many haulers on display.

We haven't seen the Japanese Tuners Collector Set anywhere online yet, but when it does show up it will probably set you back anywhere between $30 to $100. If you can overcome your FOMO, you'll get it at the lower end of that price range. Sure, there are plenty more detailed dioramas out there to look for, but this packaging will do nicely if all your budget is aimed at buying collectibles instead. 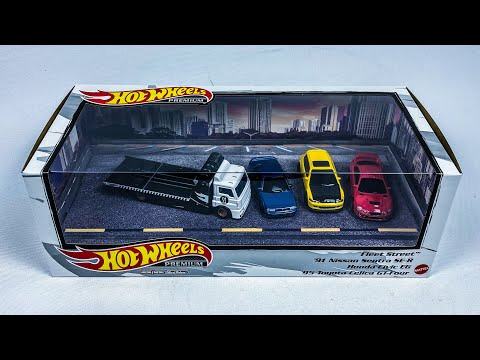