1 Hot Wheels: World Race is an Underappreciated Classic You Should Watch, Here's Why

4 Inside the 2022 Hot Wheels Deutschland Design Set, a Perfect Gift for Diecast Enthusiasts

5 Inside the 2022 Hot Wheels G Case, VW Super Treasure Hunt and GMC Hummer EV Are Revealed
Up Next

Dragos Chitulescu
Just recently, I tried re-watching the first installment of the "Fast & Furious" saga. Many years had passed since the last time I had seen it. I don't think that 20 years ago, anyone would have imagined it would become such a global phenomenon. Still to this day, I feel that the first three movies are the only ones that matter, even considering the nonsensical parts here and there. And it's fun to see Hot Wheels delivering more hero cars to the general audience every year.
10 photos

Eight years ago, in 2013, Mattel released a set of 8 "Fast & Furious" cars, including Dominic Toretto's Dodge Charger R/T and Brian Earl Spilner's Toyota Supra and Nissan Skyline GT-R R34. Somehow, both the Dodge and the Toyota have eluded me so far, but I do have two R34s in my collection right now. Every year since 2013, Mattel continued releasing these special cars, and people kept buying them. Suki's pink Honda S2000 made an appearance in the collection back in 2016, while Brian's Evo from the second movie was made available in 2019.

While most original fans might not be happy with the direction of the saga for the past few years, "Fast & Furious" collectibles are still going to be successful on the market, at least for a while. And you should be on the lookout for the Real Riders releases because those are some of the nicest ones to have. It just so happens that for 2022, Hot Wheels has launched "Fast & Furious" Mix 3, a Replica Entertainment set containing 5 models. This time, we're looking at an all-American-Muscle line-up, so JDM fans will just have to wait for a future release.

Arguably, the nicest diecast of the pack is the 1999 Ford F-150 SVT Lightning, a replica of the vehicle used by the late Paul Walker in the first movie. This truck might not have played a significant role at the time, but it's still an instant classic and highly desirable to this day. Launched in 2020, the 1/64 scale SVT Lightning replica was also presented last year coated in Metalflake Silver, but most people would rather have the original red instead. The second item in this Premium Series is a 1987 Buick Regal GNX - the fuel tanker hijacking machine from back in the day.

But if these two vehicles didn't manage to get your attention, perhaps you'll be more excited for the older cars in the set. The 1968 Dodge Charger is one of the main attractions here, even without a massive blower sticking out through the hood. Even at this scale, Hot Wheels have managed to capture a few cool details, as you would expect with any Real Riders cast. The 1977 Pontiac Firebird is not half bad either, but how many of you can even remember which "Fast & Furious" movie this was in?

Now, I did try to watch "Fast 9" but ended up skipping through the action in a matter of minutes. If you sit through the whole movie, you'll instantly recognize Letty's 1970 Chevrolet Nova SS. This might be the least exciting vehicle in this set for some people, but I am sure it has an audience of its own. It will probably take a while until you'll be able to purchase this pack, but until then, there are plenty of other options available on the market. Just remember to set a budget and stick to it, or else you'll end up spending your monthly salary on diecast cars. 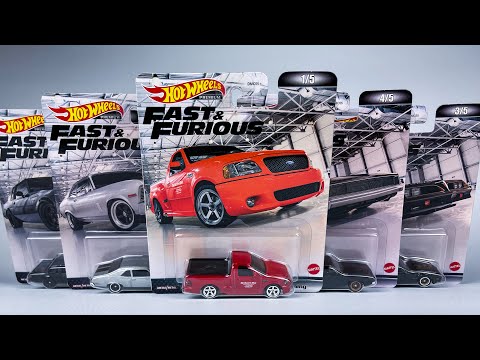