1 1973 Toyota Celica Is a Chevrolet at Heart, Wins the Hot Wheels Legends Tour in Canada

4 Hot Wheels RLC Exclusive Lamborghini Countach LP500 S Coming Up, Will Be Made to Order

5 Hot Wheels RLC Exclusive Chevy 454 SS Was an Instant Hit, All Sold Out in 10 Minutes
Car video reviews:
Up Next

1934 Ford Abandoned for 50 Years Gets Second Chance, Still in One Piece

The Hot Wheels news bulletin has been rather quiet lately. Everyone is desperately waiting for the release of Cases P and Q, but some Red Line Club goodness is bound to quench their thirst for diecast cars. Meanwhile, you shouldn't forget that you can still order the RLC sELECTIONs Lamborghini Countach LP 500 S until the 25th of July, which is two days away from now.
14 photos

Looking at the Hot Wheels community, you'll hear different opinions about Red Line Products released this year. Some collectors are ecstatic about how things are going this year, while others are still reminiscent of past offerings.

Most of the limited edition cars produced for RLC members in 2022 have their roots either in Japan or the United States. The lowest production number has been set at 25,000 units, and that applies to the 1952 Dodge Power Wagon and the 1962 Ford F100.

That's right, there has been another variant of the Ford F100 pickup truck earlier this year. It was released on the 15th of February, and it is somehow considered to be part of the 2021 RLC series.

It was the last but final product for the previous year, while the 1991 BMW M3 was the last one before the introduction of the Ford Mustang Boss Hoss. This first Spectraflame Bright Orange version sold out within the first 15 minutes since it was posted up for sale, and there's no reason to think that things will be any different this time.

The new version will go live on the 26th of July at 9 AM PT. It's now sporting a cool Spectraflame Navy Blue finish with "Genuine Ford Parts Sales and Service" logos on the doors. This time the Real Riders deep dish wheels feature red hubs that match the color of the engine cover.

Mattel has decided to bump the production numbers to 30,000 so that more people can get their hands on the model. Pricing is set at $25 per piece, and there's a limit of one item per customer or a total of five per household.

The highlight of this vehicle has to be the opening hood, which gives you a glimpse of the inline-six engine. Granted, this isn't a big block V8, but that would only take away from the classic vibes of this pickup truck. Brendon Vetuskey is the master designer here, and you'll see more of his work throughout the RLC and Monster Trucks items in the Hot Wheels lineup.

Judging by how things went with the last two models, the Chevy 454 SS and the Nissan Skyline R34 GT-R, we're willing to bet that the full supply will be exhausted in less than 10 minutes. Your only chance of getting one is entering the shop at the exact moment the product goes live, and be as quick with the Add to cart button as you would be launching your car at the drag strip.

If you manage to place an order, you'll have to wait between two to four weeks to get your hands on the car. When it does arrive, it's worth checking out the number on the back of the card: lower number cards will hold more value if you intend to sell or trade in the future.

You can see a video of the first 1962 F100 RLC exclusive model below, which should give you an idea about the quality of these adult-collector items. And if you didn't get one at the start of the year, you can always look them up on eBay.

The cheapest one you'll find is about $39, while some sellers are asking for as much as $125. There are even listings of the new model, going as high up as $150 per item. But we aren't here to judge; perhaps some people will be happy to pay extra for a car they couldn't get the first time around. 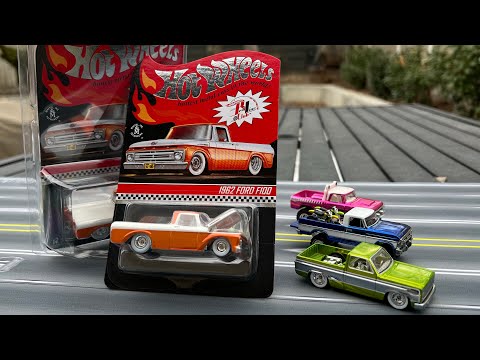