4 1973 Toyota Celica Is a Chevrolet at Heart, Wins the Hot Wheels Legends Tour in Canada

We should be seeing the last but final case of Hot Wheels Mainline cars any day now. But until then, Mattel has been keeping us busy with Red Line Club models including the sELECTIONs Lamborghini and the 1962 Ford F100. For those of you who are in a hurry to increase the size of your collection, there's always the option of buying 5-packs. And it seems that there are four new ones out there for you to hunt.

Hot Wheels Celebrates the Ford Mustang With a New 5-Pack, There Are More Surprises Still

Over the years, Mattel has sold Hot Wheels vehicles using different packaging ranging from the 2-pack up to the 20-pack variety. But the ones you'll see most often in stores contain either three or five cars. And today we're taking a look at four of the most recent 5-packs.

In 2022, about a dozen of these have been introduced to toy stores around the world. Most of the time, you'll see at least one or more Fantasy cars included, but there are some exceptions.

For instance, the Hot Wheels Motor Show pack includes the Renault Sport R.S. 01, the 2013 SRT Viper, Aston Martin Vulcan, Jaguar XE SV Project 8, and Lamborghini Sesto Elemento. The HW Race Team is one of the most popular items to be released this year, with all the cars sporting Hot Wheels representative liveries.

Right now, the guys over at Ministry of Diecast have gotten their hands on 20 new items, some of which are downright exciting! Most adult collectors don't care about fantasy cars that much, so we'll skip talking about the HW City pack altogether.

Rating the other three items is quite a difficult task, but we like the idea of a Ford Mustang exclusive collection. The casting for the 1962 Ford Mustang Concept has been around for more than a decade now, but it's probably one of the lesser-known models in the Hot Wheels community.

The 1992 Mustang doesn't depict one of the most popular designs for the pony car, but it would still make a nice addition to any collection. It's good to see the 2015 Ford Mustang GT Convertible once again, as it hasn't been used since 2018.

This is only the fifth iteration of the casting so far, and it has been showcased previously in red, dark blue, yellow, and black. For many American Muscle fans, the 1969 Ford Mustang Boss 302 is likely the highlight of this 5-pack. While this is no Premium casting, it does showcase enough details to make it stand out from the crowd.

The last piece you'll find inside is the 1971 Mustang Mach 1, which was designed by Larry Wood and revealed in 2010. The Nightburnerz pack is up next and it's quite an interesting one aside from the Alpha Pursuit police car.

The rarest casting here is the Mazda Savanna RX-7 FC3S. Launched in 2020, we've only seen three variations of it so far: red, white, and metal flake Navy Blue. Yellow suits it just right, and you should see how spectacular one of these looks in full size.

The 1998 Honda Prelude isn't all that common either, and this is its first appearance for 2022. The Datsun 620 has been around since 2014. Mattel uses this casting about as much as it does with the Mazda REPU pickup truck.

But it's the McLaren Speedtail that takes the award for the most exclusive vehicle in this 5-pack. The British manufacturer only built 106 of these, so for most people, the 1/64 scale replica is their best chance at owning one.

The HW Exposed Engines is a cool little concept, especially for those of you that are crazy about quarter-mile (402 meters) racing. While the thought of a dragster coffin might be appalling to most people, the Rigor Motor casting has been around since 1994. It might remind some of you of The Munsters television show and that's no coincidence.

Any Hot Wheels Gasser is always going to be popular with fans, and the 1964 Nova Wagon isn't going to be any different. If you've just recently started collecting 1/64 scale vehicles, you might be surprised to know that the Fiat 500C has been part of Mattel's portfolio since 1999.

But its relative obscurity can be traced down to the fact that this is its second appearance since 2009. The 1968 Gas Monkey Garage Corvette looks stunning in orange, but it's nowhere near as good as the 2021 Replica Entertainment premium model.

Last, but not least, we're getting a new variation of the Bone Shaker! This casting is nearing its 100th iteration! Some fans have made it a statement to focus on this model, and it was even featured in the Hot Wheels NFT series. 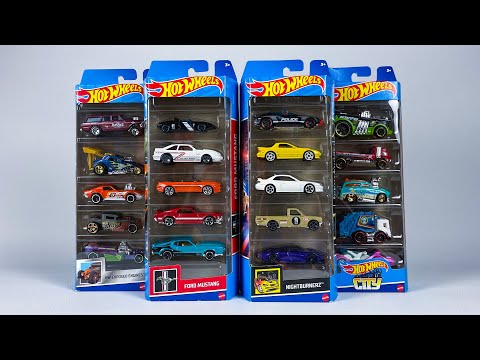