3 If You Feel like Road Rage Is Getting the Better of You, It’s Best to Step Out of the Car First

I’ve always thought that climbing into a cab takes more courage than jumping off a cliff with no parachute or any kind of strings attached. You’re not as likely to die, of course, but it’s the anticipation of the moment when something will go wrong that’s going to kill you.
1 photo
And, eventually, something inevitably does go wrong, right? Because no matter where on the globe you find yourself, cab drivers are always the same: they’re the best drivers this world has ever seen, and don’t even think about telling them otherwise.

I could fill the whole Internet with stories about how cab drivers tried to kill me, but it would take too much time and, after a while, they would become boring. Besides, I’m sure everybody else has bucketloads of their own.

All taxis should have a sticker above the passenger side door with the famous quote from Dante’s Inferno: “Abandon all hope, ye who enter here.” You’re basically putting your life in the hands of a total stranger who, for all you know, might have been driving for 24 hours straight because he desperately needs the money and doesn’t care about his or your wellbeing all that much. He’s on his seventh coffee and he nearly fell asleep three times during the last hour. But, by all means, climb on board. What’s the worst that could happen?

Well, how about this for instance? This accident involving a Hong Kong Toyota Crown Comfort Urban red taxi is the kind of incident where any explanation is as good as the other. It all happens for no apparent reason other than some poor reactions - the road is dry, the speed isn’t that great, and even though the car is coming out of a wide left-hand bend, it’s light-years away from what you could call a hairpin.

The cab seems to have been occupied at the time of the crash, but even without the seat belt on (which is akin to entering the lion’s cage after rolling around in bacon), the passenger should be relatively OK. And let’s look at the bright side: no other car was dragged into his little performance, even though there was plenty of traffic around. 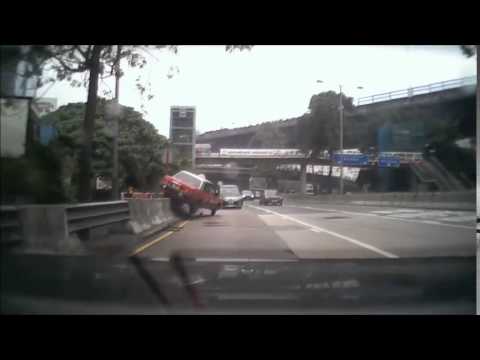