Dragos Chitulescu
I remember being obsessed with RC cars when I was growing up. I had my eyes on a 1/10 scale replica of a famous Monster Truck, but at the time, it wasn't all that easy to get one. So I had to settle for much smaller cars instead. Later on, my cousin started fooling around with radio-controlled helicopters and drones of various sizes. But there are people in this world that have gone to a whole different level when it comes to flying.
9 photos

Everything is relative. If we told you that we came across a plane that is both huge and small at the same time, what would you make of it? Well, let's look at the stats. The Airbus A-380 is one of the largest man-made objects of all time.

Now, the turbine aircraft you'll see in the video below is a 1/13 scale replica of the Thai Airways A-380. It has a wingspan of 6.13 meters and a length of 5.6 meters. That means the weight is down to 226 lbs (102 kg). To an untrained eye, it seems impossible to tell whether this is real or not.

Of course, seeing people handling it will unravel the mystery. While the four Rolls-Royce engines on the real thing each generate 70,000 lb (311,375 N) of thrust, the RC plane has to do with four smaller turbine units that get up to 37.4 lb (166 N) each.

This RC A-380 took Christopher Ferkl from Austria 1,700 hours to build, over three years. In case you're wondering how expensive it was, we don't have the actual figures, but the price of the engines says it all: €2,205 ($2,247) per piece! Talk about an expensive hobby! 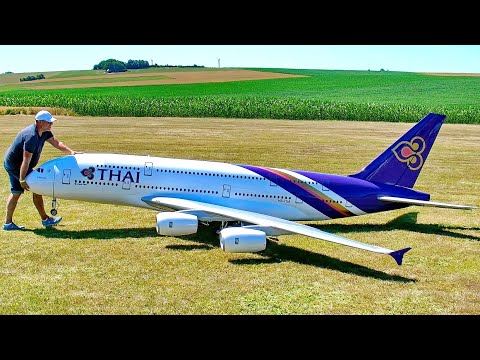