I just love digging up the internet in search of crazy projects such as this one. I knew it was going to be a hit ever since I noticed who the mastermind behind the idea was. His "Rusty Slammington" BMW was viral several years ago, and a Honda-swapped Ferrari could not be any less popular. As the car is still being built, it will probably achieve full levels of recognition once it's up and running.
7 photos

And it doesn't seem to be that far off. You're watching the 31st episode of the build, and a lot has happened since we last had a look at what Mike was up to. What drew our attention was the fact that he just recently took delivery of the new body kit for the car, which came from Japan. Given that this will be used for Time Attack, what better option than the Liberty Walk widebody kit, to make it look period correct?

If you aren't all that familiar with the Japanese company, you might be shocked by seeing the price tag, which is close to what you'd pay for a brand new Chevrolet Spark. It's funny that Mike even chose to describe himself as a person who "over-pays for body kits," although we'd expect this car to be built as a partnership between the two brands. And while he had already upset a few purists, this next move is bound to light up the controversy.

"Turbos are cool, horsepower is cool, going fast is cool, all that stuff is great, but what good is going fast if you don't look good doing it? That's why there are three rules for a reason: always look cool, always know what you're doing, and if you can't follow rule number two see rule number one," Mike says, talking about his choices and decisions.

The package is almost as big as Mike and contains a front bumper, a rear wing, and wide fenders. "Normally I'm not a Liberty Walk kind of guy..however when I first saw this kit on Kato's own 308 at the 2018 Tokyo Auto Salon, I knew immediately that's something I've got to have in the future because this kit is simple, it's elegant, it's kind of period correct, and it's honestly how a 308 should look if you ask me," he explains.

Going over the history of the project, we learn that getting this kit was in the back of Mike's mind from the very beginning, and he bought it back in November 2020, the same weekend the car had arrived at his shop. As he unpacks the whole thing, we see every part before it gets mounted onto the car. It soon becomes obvious that the insane price is well worth it, as the pieces just fit perfectly onto the vehicle.

"The fit of this kit is impressive and if you're dumb enough like me to buy one I will say at least the thing fits," Mike confirms. Even though the body kit is finished in white, in contrast to the yellow on the car, the whole thing looks savage, although a larger rear spoiler might have been even better. Mike is trying to figure out right now if these new parts should be painted in satin black or color-matching yellow.

He turns things up a notch by test-fitting a set of BBS E19 rims, just to see how the car looks like. A different set of rims, which will be custom made, will soon be brought into play, but until then, we're left drooling at what might be one of the coolest custom cars of 2021. These BBS rims used to be on a Lola race car, and it's hard to think of anything that would look better on the Ferrari at the end of the day.

As Mike states, there is just one other Ferrari 308 around with this body kit on it, and that one belongs to the man behind Liberty Walk: Wataru Kato. But that was built as a show car, which is different from what Mike has in mind. This M1-reminiscent 308 will be driven hard at the racetrack, and it should make for some stunning photos and videos once it's 100% done. 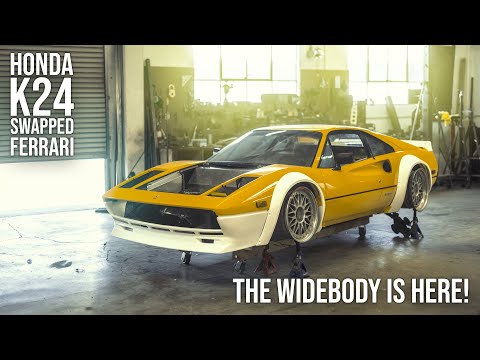