1 Indonesian Man Brings Joy to the World, One Custom Hot Wheels Car at a Time

We just recently interviewed the man behind Tolle Garage, a custom diecast artist from Indonesia. And he mentioned that he started practicing this craft after being inspired by the people over at Jakarta Diecast Project (JDP). Now, we've featured both artists on here before, and they always seem to come up with new ways to entertain us. This time, we're looking at quite a special idea that revolves around a Japanese vehicle.
15 photos

Several months have gone by since we've seen a custom Honda built by JDP. At that time, they went for a Honda Civic FK8 with a wild Rocket Bunny body kit. Looking at other Hondas they've completed over the past 12 months, you'll notice a Civic EF Sedan, a Civic EG with a K20 swap, a drag-spec Civic EK9, and a Pikes Peak special CRV. These guys even built a replica of the famous Acura NSX Camper that's driving around the USA, but you can lose yourself for hours in a row looking at their videos either way.

Their most recent idea involves a Honda S2000 that started as a mainline Hot Wheels model. This casting was launched in 2011 and bears Ryu Asada's signature design. You could say that it has been quite popular over the years, with more than 30 variations released so far.

But the mainline version is ultimately an affordable replica of the real thing. And that means it could do with some fine details here and there. But you can't expect a master of the arts like these guys to settle for just an ordinary touch-up.

They went all the way with this car, which means giving it the stance treatment and a flashy paint job. But more importantly, they swapped in a twin-turbo V8 engine which is not something you would normally see on an S2000.

The video might be only 18 minutes long, but it must have taken them hours, if not days, to build it up to this level. And seeing it on display next to some of their other Honda is the cherry on top of it all. Unique as it is, this is probably worth at least $100, if not more. 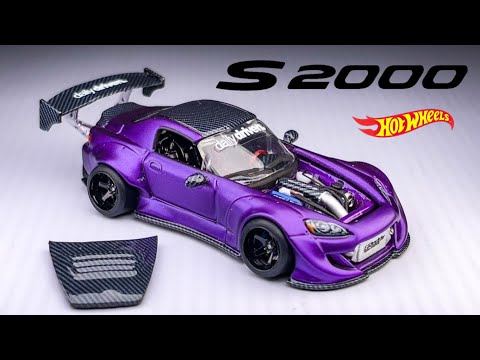