Slim Thug Takes Us on a Tour of His Black Garage, It's a Gearhead's Dream Come True

A petite roadster that also spawned a coupe, the MGA weighs just over 900 kilograms (1,984 pounds) in its lightest configuration. The first run came with a 1.5-liter mill that originally produced 68 horsepower. The final run leveled up to 1.6 liters and 90 horsepower, which pales in comparison to the Honda S2000 F20C-swapped MG MGA Roadster in the featured video.

Acquired by the current owner in 2014, the 1959 model was stripped to bare metal. Refinished in silver paintwork over red leather upholstery in 2018, the British sports car with a Japanese heart flaunts a reshaped front end that dons a polished grille. Rear chrome bumper uprights were also fitted, along with custom taillights, dual exhaust finishers that exit below the rear fascia, a Le Mans-style windshield, wire wheels, as well as a flip-up fuel cap.

The 2.0-liter F20C had its oil changed a few months ago in preparation for the sale on Bring a Trailer. In addition to the engine per se, the other highlight of the engine bay is the 52-millimeter velocity stack fuel injection. A replacement fuel tank, dual fuel pump, and new fuel lines were fitted by the current owner, who is selling the car with a quirky tonneau cover.

With seven days of bidding left, the highest bid is currently listed as $4,000 after two offers. The auction ends Friday, September 30th, at 8:50 pm. 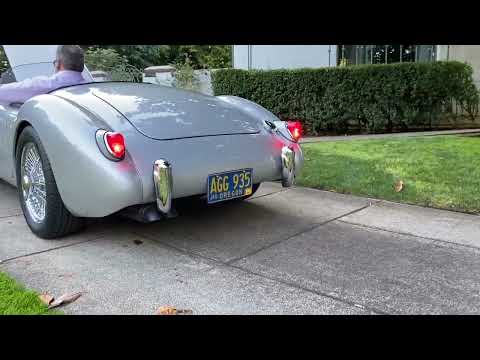