3 Jay Leno Jumps Into the Morgan 3 Wheeler, Recalls Driving One Into a Ditch

British sports cars from the good ol’ days are charming in every respect with the exception of reliability. In addition to woefully bad electrics and electronics from Lucas, many of those cars feature capricious engines.
35 photos

The Morgan we came across on Bring a Trailer breaks the stereotype with the 2.0-liter VTEC four-cylinder powerplant from the Honda S2000 AP1, a high-revving motor that redlines at 8,800 rpm and cuts off fuel at 9,000 rpm.

F20C is the internal designation of the free-breathing lump, which is complemented by a six-speed manual transmission and a limited-slip differential out back. Reportedly finished in 2014, the car has racked up approximately 10,000 kilometers (6,214 miles) on the clock since then.

Capable of around 240 horsepower and in the ballpark of 160 pound-feet (217 Nm) without any mods from the original specification, the F20C is rocking the Morgan crest on the valve cover, a custom-fabricated aluminum fuel cell, a custom aluminum radiator with an electrical cooling fan, a heat-wrapped exhaust header, and a Magnaflow exhaust muffler. Last serviced with fresh oil in 2020, the British roadster isn’t all that British underneath.

Take a moment and read the headline again. The Honda S2000 swap also includes the chassis from the donor vehicle, which is why the body has been widened by Jetstream Custom Auto in British Columbia. As for the front bumper and mirrors, those were reportedly sourced from a Plus Eight.

Anti-lock brakes on every corner also need to be mentioned, along with Koni and Bilstein coil-over suspension, power steering, and S2000 seats with the Morgan crest embroidered in the headrests. The finishing touches come in the guise of a Moto-Lita steering wheel and Classic Instruments gauges that include a 200-kph speedometer and a 10,000-rpm tachometer.

With six days of bidding left, the car currently sits on a high bid of $10k. 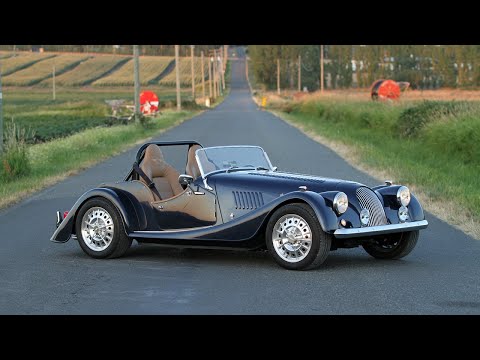