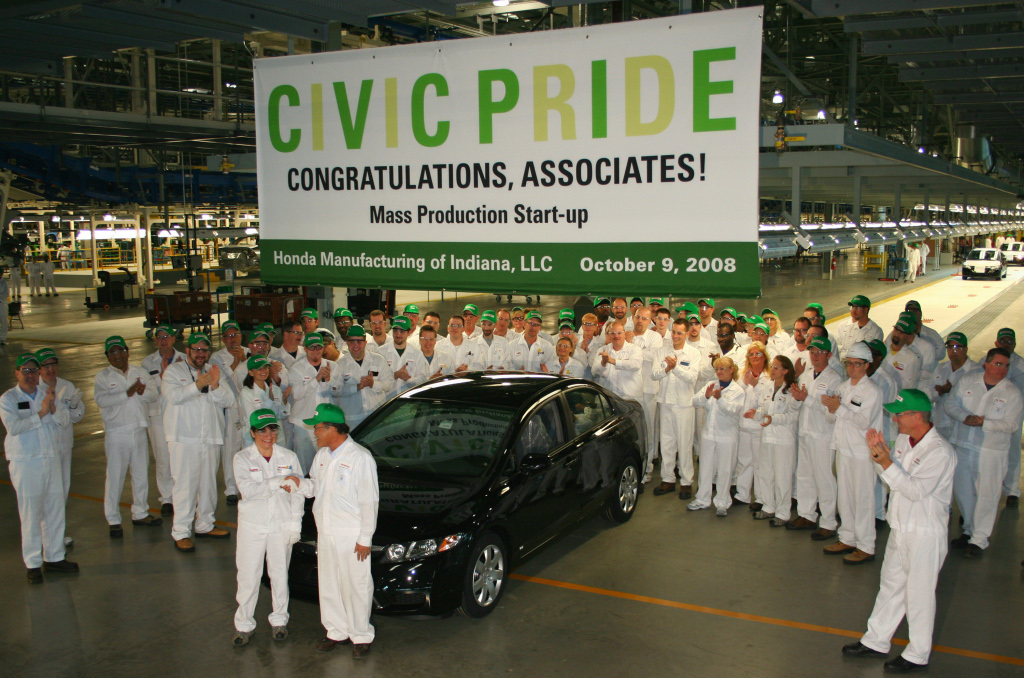 Contrary to the financial collapse-triggered tendencies that have pushed the majority of auto producers to employment cutbacks and temporary production halts, Honda trumpets the opening of a new plant in Greensburg, Indiana. Only yesterday, the factory began production of the Honda Civic sedan following the increasing popularity of the vehicle in the US.

Production will focus entirely on the aforementioned model with annual figures ultimately set to reach 200,000 units. In spite of the sales-decline twilight zone that seems to have effortlessly sucked-in most car manufacturers, including Honda, the Japanese maker took a leap forward instead of taking a step back like some others have done.

Only a while ago, Honda reported a sales decline of 24% for the month of September and still they carry on lightly as if the company hadn't been affected at all. “With continued high demand for the Honda Civic, we are honored and excited to help meet the needs of our customers in North America”, said Yuzo Uenohara, president of Honda Manufacturing of Indiana (HMIN).

The Honda chief also reiterated the obvious by stating, “Our new Indiana associates are dedicated to building the very best Honda products, with customer satisfaction as our top goal.” This enthusiastic approach to meeting customer demands antagonizes that of fellow competitor Toyota who is currently struggling to fix a brand confidence issue with its customers.

Not only that the factory is on its way to working at full capacity but will also help fight local unemployment by ultimately offering a total of 2,000 job openings. The plant, which cost $550 million to raise, is Honda's second highly flexible zero waste to landfill facility and the company's 16th major factory in the US. The capital invested by the Japanese colossus in North America is nearing $11 billion.