2 Guys Put a Lawn Mower Engine On a Honda Sports Bike, Turn It Into a Honda 212

Home > News > Car Profile
Vlad Mitrache
There is plenty to choose from in the hot hatch segment, and manufacturers launching special edition versions of their existing models sure aren’t doing anything to help with that. However, as long as they’re any good, who’s going to complain?
9 photos

But that’s the question: are they worth it? Take the Honda Civic Type R Limited Edition, for example. It is basically just a more extreme version of an already excellent front-wheel-drive hot hatch (some will even say the best), featuring BBS forged-aluminum wheels and Michelin Pilot Sport Cup 2 tires, modified dampers, and recalibrated steering. The engine is the same turbocharged 2.0-liter four-cylinder unit developing 306 hp and 295 lb-ft (400 Nm) of torque, all sent to the front wheels through an excellent six-speed manual transmission with the help of a limited slip differential.

The Honda is clearly setup for uncompromised performance, and just in case that wasn’t obvious enough, the Limited Edition also makes do without an air conditioning unit or an infotainment system – all in the name of weight saving. If only cracking the window open to cool down didn’t affect the aerodynamics – it’s decided, if you want the best possible performance, you’re going to sweat.

You won’t encounter any of those problems in the Golf GTI Clubsport 45, which is fully decked with technology. Like the Honda, it too is a special, limited edition, marking the 45th anniversary of GTI, but unlike the Japanese model, it doesn’t sacrifice any of the comfort. Not only do you get air con and a decently sized display (there’s a digital instrument cluster as well), but the seats are quite comfortable too. In fact, they may just be a little too plush, so it’s a good thing the Clubsport 45 gets a 296 hp version of the ubiquitous 2.0-liter turbocharged engine you’ll find under the hood of every performance Golf in one form or another, or you’d risk falling asleep.

The review below goes into much more detail about both of the two hot hatches, but the bottom line is this: if you’re looking for best FWD hot hatch from a handling perspective, look no further than the Honda Civic Type R Limited Edition. The journalist calls it the “911 GT3 of hot hatches”, and we don’t know of any higher praise than that.

However, if you’re after a car that’s much easier to live with, out of these two, the Volkswagen Golf is by far the better option. That being said, the reviewers think you’d be better off skipping the Clubsport 45 version and looking at other options within the range of Golf hot hatches. For the same money, you could probably afford an entry-level Golf R, which makes the Clubsport 45 pretty redundant. 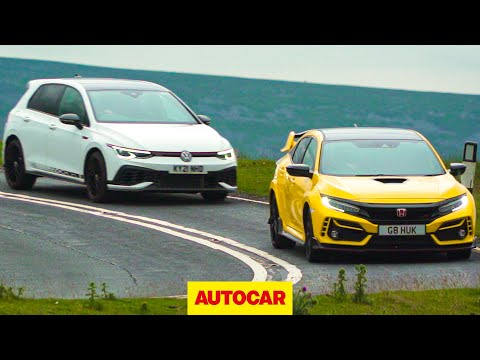