We've heard about stuff like this before, many times over. The Defender may be slow and agricultural, but it's straightforward to work on and has real charm, so many people try to stuff powerful V8 engines into the chassis.

You may have heard that the Defender is being killed off, but you probably didn't realize it already happened more than two years ago. However, to celebrate the 70th anniversary of the model, Land Rover has decided to re-engineer the Defender for the modern age.

But instead of installing an electric engine, as Jaguar did with the E-Type, a big V8 was chosen. 150 examples have been gifted with a 5-liter making 400 horsepower and over 500 Nm of torque. What it doesn't have is a supercharger, because that would probably have killed all the drivers.

For almost five times more money than the Honda Civic Type R, you can also enjoy new tires, wheels, springs, dampers, anti-roll bars... the works. As you may have noticed, bucket seats have been installed.

The Civic is a polar opposite. The hot hatch is much quieter and refined when it wants to be. It has better noise insulation, and under its hood lies a four-cylinder with less than half the displacement. However, it doesn't leave you wanting more power because, at 320, it explores the limits of FWD technology.

As we saw in a recent drag race, it's a car almost without equal among its peers. So how do they compare in the drag race? Well, it's like going into Gran Turismo and picking opposite models to drag race.

The Civic has no boost off the line and also struggles for grip a little bit. The big V8 rockets the Land Rover off the line almost immediately and stretched its lead over the first five or six seconds. However, its boxy shape suffers at high speed, and the Civic catches up, eventually winning the race. 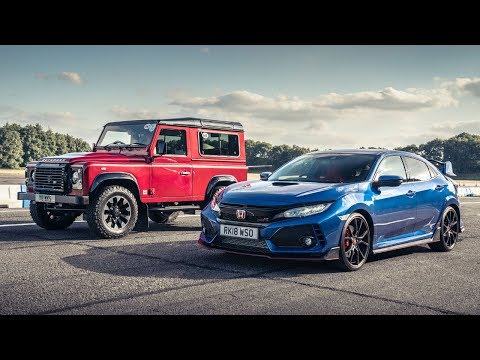