Aurel Niculescu
Launched in 2021 for the 2022 model year, the eleventh-generation Honda Civic has already gone through a full production cycle and now looks forward to the 2023MY future.
17 photos

Over in America, one can have the legendary compact Japanese car from a starting MSRP of as little as $24,650 when selecting the base Civic Sedan configuration. And no worries, there are plenty of options on offer, including the $25,450 Civic Hatchback (dubbed by some as a perfect e:HEV family five-door), the $28,100 Civic Si Sedan, and - of course – the flagship $42,895 Civic Type R.

But what if some people want even more body styles? Well, some other folks might just oblige, even if only virtually. So, here is the digital artist better known as Theottle on social media, who has decided to CGI-rework the eleventh Civic in a way unlike before - as a two-door Convertible. Interesting, right?

The timing is not entirely correct – maybe this thing should have been flaunted during summer, but the pixel master was kind of rattle-headed and only now found this behind-the-scenes making-of video based on the preview Honda Civic Prototype. So, he quickly shared it with us, probably hoping that no one would notice the revealing license plate.

Anyway, with this being merely wishful thinking, it really does not matter if he started from the Prototype or production series base. The Honda Civic Convertible still looks great in hot orange attire, with the top dropped behind the rear seats, and with just a couple of doors to allow access to them. There is just one hypothetical question left to answer.

What powertrain would be feasible for this new body style to bode well for the posh 2023 summer season? I would love to imagine this Civic Convertible has the 200-hp Civic Si credentials, complete with the six-speed manual transmission. But there is also a more sustainable choice, such as the e-HEV option, right? 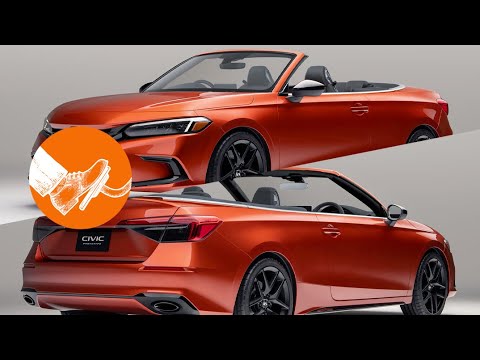