Home > News > Renderings
Aurel Niculescu
Honda is on such a massive roll this year that it has caught everyone’s attention, both in the real world and across the virtual realm. And that’s pretty cool.
20 photos

The Japanese automaker has sought to wow and amaze with the all-new HR-V (dubbed ZR-V internationally as China and North America have a fresh version), the best-selling CR-V compact crossover SUV, the feisty Civic Type R, and – of course – with the ultimate family globetrotter, the mid-size three-row Pilot.

But there was more, much more. As such, the company quickly also took the official wraps off the eleventh-generation Honda Accord sedan to try and revitalize the mid-size sector with a subtle four-door packing 1.5-liter turbo (from Civic) and 2.0-liter hybridized oomph. And, naturally, it continued to remain a darling of the digital realm even after the official presentation.

This is because virtual automotive artists now believe it could gain even more Civic DNA in the form of the hypothetical Accord Type R performance sedan. So, here is the virtual artist better known as Theottle on social media, who has decided to CGI-rework the newly introduced 2023 Honda Accord from Hybrid Touring to Type R with ample help from the feisty Civic Hot Hatch.

And while only logical CGI things happen at the front where the Civic Type R visage was stretched on the larger Accord, the most interesting part of the latest behind-the-scenes making-of video (embedded below) starts at the 2:43 mark when the pixel master starts to also morph the rear end. There, the potential Accord-Civic Type R sibling relationship is made clear even further, as the biggest mid-size sedan keeps both the high wing as well as the quirky triple exhaust.

But then, in the end, the author also puts out a lot of questions: “what if Honda makes an Accord Type R? What engine will it use, Civic Type R’s? (Will it be) front- or all-wheel drive, manual or automatic transmission?” Well, I wish at least we had an answer to the first query… 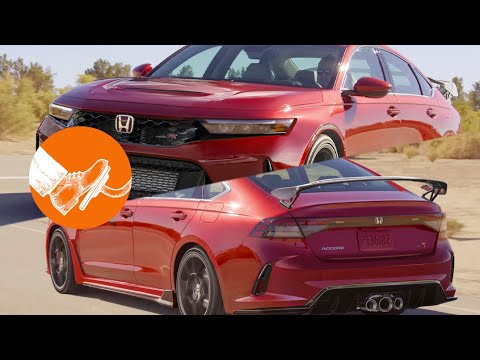