1 Dodge Demon Races Hellcat Redeye, and It’s the Underdog Who Raises All Hell

Holden Commodore Confident It Can Beat the Dodge Demon, Has No Idea What's Coming

Despite being put out of its misery by General Motors, when they officially pulled the plug on Holden, the Commodore still has a lot of life left in it. And if you stay clear of the last generation, which is nothing more than a rebadged Buick Regal, and Opel/Vauxhall Insignia, then you will get a nice sporty sedan.
9 photos

The VF, which is the one that tried its luck against the mighty Dodge Challenger SRT Demon on video down below, can trace its roots back to the Chevrolet Camaro.

That was more than decent for a four-door sedan built last decade, but it really is no match to the Demon, or is it? The official spec sheet tells us that the Dodge sits in a league of its own. It too packs a 6.2-liter V8 engine, albeit with supercharging, and it has 840 hp and 770 lb-ft (1,044 Nm) available via the right pedal.

Thus, the Challenger SRT Demon is twice as powerful as its ad-hoc rival from the defunct brand, and needs 2.3 seconds to hit the 60 mph (97 kph) mark from a standstill. Truth be told, launching it requires some prepping, not to mention a lot of skill, and perfect weather conditions, but if you nail everything, then you’ll run the quarter mile in less than 9 seconds.

Now that we covered the basics of both rides, do you really think the Commodore can beat the hell out of the Demon in a straight-line sprint? You know what to do to find out. 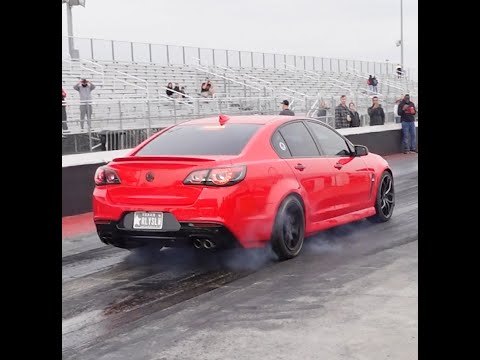